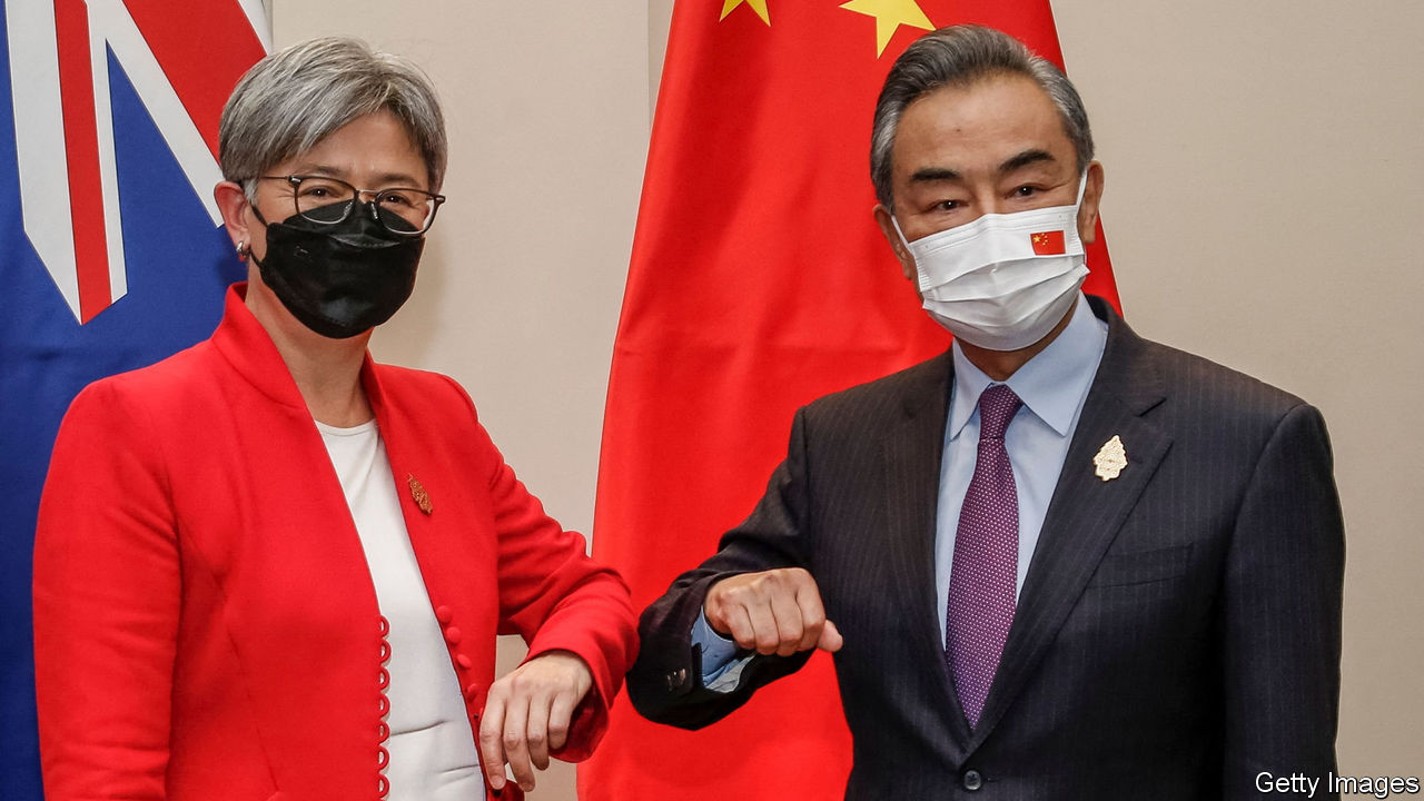 The break-up was slow and acrimonious. Australia first rankled China, its biggest trading partner, by passing laws to prevent meddling in its democracy, and by banning Huawei, a Chinese telecoms giant, from its 5g network in 2018. Then, in early 2020, as a mysterious coronavirus outbreak in the Chinese city of Wuhan grew into a pandemic, the Australian government called for an inquiry into the origins of the disease. That was the last straw. China huffed that Australia was “poisoning bilateral relations”, curbed its exports and stopped answering politician’s phone calls.

In a climate-focused election in May, Australians kicked out the conservatives who had been in office for nearly a decade and voted in a new centre-left Labor government. Ever since, the ice has begun to thaw. Two senior Chinese ministers recently met their Australian counterparts, the first such high-level talks in more than two years. A new Chinese ambassador to Australia, Xiao Qian, has launched a diplomatic offensive, saying he wants to break down suspicion between the two sides. He insists that “there is every reason for China and Australia to be friends and partners, rather than adversaries or enemies”.

Australia’s new government, led by Anthony Albanese, certainly wants a less confrontational relationship. Whereas the country’s previous leaders complained loudly about China’s human-rights abuses and the risks of war in Taiwan, Labor points diplomatically to “full and frank” discussions held in private. The defence minister, Richard Marles, “raised a number of issues of concern”, including “Australia’s abiding interest in the Pacific”, at talks with his Chinese counterpart, Wei Fenghe, in June. The foreign minister, Penny Wong, “spoke frankly and listened carefully” to her opposite, Wang Yi, at a meeting in Indonesia on July 8th (pictured). “This is the first step towards stabilising the relationship,” she argued.

The softer tone may lead to China lifting some of its trade restrictions. Officials in Beijing are considering scrapping an unofficial ban on Australian coal imports, in place since 2020, according to Bloomberg, a news service. Yet that is only because it has hurt China’s own economy, says Justin Bassi, who heads the Australian Strategic Policy Institute, a hawkish think-tank in Canberra, Australia’s capital. It might be looking for an opportunity to reverse self-defeating policies “without being seen to compromise”, he says.

There will be no returning to the old relationship, however. For years politicians in Australia insisted it could strike an easy balance between deriving its security from its alliance with America and depending heavily on China for trade. Today security is given more weight. The new government is as concerned about what Ms Wong calls “our national interests, our national security and our sovereignty” as the last. “Whatever language is used, it’s still the case that our interests are diverging from those of China,” says Sam Roggeveen of the Lowy Institute, a think-tank in Sydney.

China’s actions, more than words, determine how Australians feel about their biggest economic partner. They have worried for years about Chinese cyberattacks and attempts to bankroll political candidates. Now they are increasingly concerned about China’s military aggression and its growing interest in their region. ​​Beijing is no closer to Sydney than it is to Berlin, but China’s rise feels like a particularly direct and pressing problem to Australians, not least because its strategic ambitions extend in their direction.

In April China signed a security agreement with the Solomon Islands, triggering fears that it might establish a military base near Australian shores. In June Mr Marles accused a Chinese jet of staging a dangerous high-speed pass in front of an Australian surveillance aircraft above the South China Sea the previous month. Over 60% of Australians now say that Beijing is “more of a security threat to Australia” than an economic partner, according to polling by the Lowy Institute. That is a spectacular reversal—in 2018 the figure was only 12%.

The new government’s response has been to “engage with as wide a group of partners as possible,” says Mr Bassi. Mr Albanese was sworn in early so that he could fly to Tokyo and attend a meeting of the Quad, a security grouping of America, Australia, India and Japan that seeks to counter Chinese influence. Ms Wong has criss-crossed the Pacific trying to counter China’s growing sway among island states with promises of deeper cuts to emissions. (Pacific governments consider climate change, not great-power competition, as their biggest problem.) Speaking to an American broadcaster, Mr Marles declared that he would build “a more effective military power aimed at avoiding a catastrophic failure of deterrence.”

If anything, the bullying has strengthened Australia’s resolve. Its economy has weathered China’s trade restrictions surprisingly well and Aussies have hardly grumbled about the damage inflicted on some industries. Most blame China, not their own politicians, for the economic fallout, and have no desire to submit to its orders. That gives Australia’s leaders more confidence to stand up for its interests. This month the Chinese government claimed that the relationship might “set sail again” if only Australia would “correct” its opinion of China in four fundamental ways: treating China as a partner rather than an adversary, reversing negative public opinion, seeking common ground while setting aside differences, and resisting “control by third parties” (America, in other words). Australians scoffed. Their country, said Mr Albanese, “does not respond to demands”.