MOST OF Europe’s football leagues have become boring. Paris Saint-Germain are untouchable in France, Bayern Munich have monopolised the Bundesliga, Juventus dominate in Italy and Barcelona have won 8 of La Liga’s past 11 titles. The only interesting prospects for fans on the continent as summer approaches are Europe’s two knockout competitions. But this year even those are highly predictable, in one sense at least: English clubs won both. On June 1st Liverpool beat Tottenham in the Champions League final, three days after Arsenal lost to Chelsea in the Europa League (a secondary tournament for teams that miss out on the Champions League). Never before has one country produced all four finalists.

A decade ago English clubs dominated in Europe. At least one appeared in five consecutive Champions League finals from 2005 to 2009. In 2008 the country could boast the world’s four best teams, according to ClubElo.com, a website which uses the Elo algorithm, originally devised for chess but now widely used in sports, to rank football clubs (see chart). However, the ensuing years were miserable for English clubs, who between them won the Champions League just once, as they tumbled down ClubElo’s rankings. None appeared in the top five in May 2017. “The puzzle”, this newspaper remarked, “is that the game’s most renowned domestic competition is not very good.” 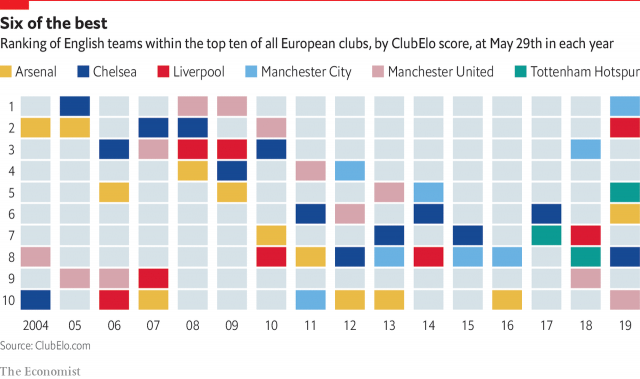 Paradoxically, the Premier League’s slump in quality coincided with a period of extraordinary revenue growth. In 2009 its earnings of €2.3bn ($2.6bn) were only €750m greater than the Bundesliga’s, Europe’s second-wealthiest division. By 2017 English clubs’ revenues had rocketed to €5bn, €2.2bn more than Germany’s. They acquired these riches by marketing themselves abroad zealously and sharing TV revenue more equally than other European teams, which made the Premier League more competitive, and therefore more entertaining.

But English clubs squandered this wealth in the transfer market, by signing established stars rather than precocious youngsters from lesser teams. Some 15% of the Premier League’s transfers since 2016 have come from an elite group of the world’s top 14 clubs, according to 21st Club, a football consultancy, compared with an average of 9% for other major European leagues. Many of these purchases—such as Manchester United’s Alexis Sánchez, Chelsea’s Álvaro Morata and Arsenal’s Henrikh Mkhitaryan—have struggled to reproduce their previously stellar performances. European clubs also know that they can charge profligate English buyers higher fees. 21st Club calculates that Premier League clubs have spent 80% more than their foreign rivals for the same level of talent.

However, three English teams have finally seen the error of their ways. Manchester City, Liverpool and Tottenham have recently spent their transfer dosh on callow players from unfashionable teams—such as Kevin de Bruyne from Wolfsburg, Roberto Firmino from Hoffenheim and Son Heung-min from Leverkusen—who have developed into world-beaters. ClubElo now ranks these three teams among Europe’s top five.

Arsenal, Chelsea and Manchester United have been less shrewd in the transfer market. But they have still managed to haul themselves back into Europe’s top ten. If they can learn to use their fortunes as wisely as their Premier League rivals have done, then European fans can expect to see more all-English finals in the years to come.