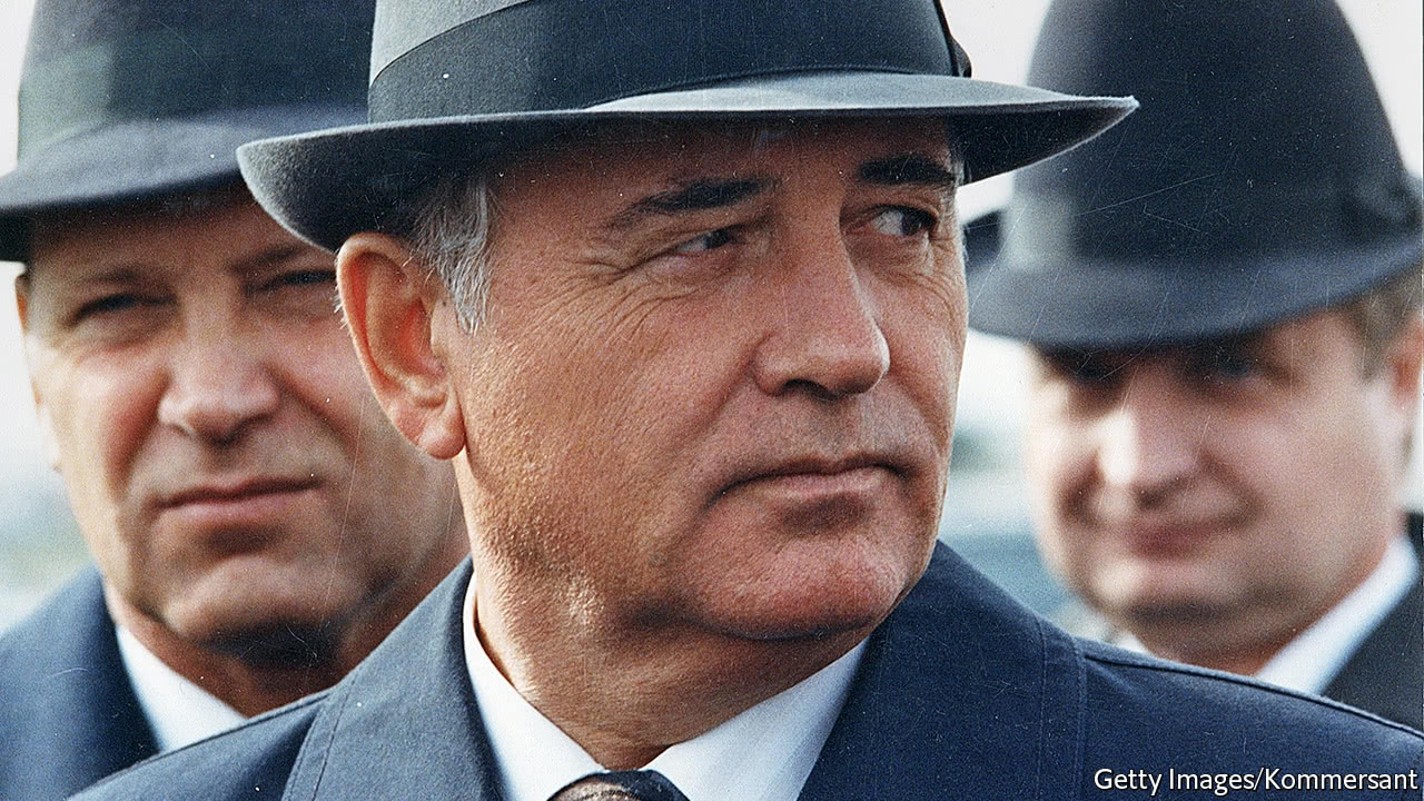 ON DECEMBER 23rd 1991 Mikhail Gorbachev, the last leader of the Soviet Union, and Russia’s first president, Boris Yeltsin, met for eight hours to discuss the transfer of power. At the end, they downed a couple of vodka shots and Mr Gorbachev, feeling unwell, disappeared into his back-office while Yeltsin strode off “as if he were marching along a parade ground”, recalled Alexander Yakovlev, a close Gorbachev ally who had brokered the meeting.

When Yakovlev went to see his old comrade, he found him lying on a sofa, tears welling. “You see, Sash, this is how it goes,” said Mr Gorbachev, who had just lost his job as the president of the Soviet Union and the country with it. Yakovlev tried to console him, but he too was choking. “A feeling that something unfair had happened was suffocating me. A man who had brought drastic change to the world …was a helpless victim of the cruelty and capriciousness of history.”

It was a history that Mr Gorbachev himself had set in motion. Ever since the end of the Soviet Union, the question of “why” has lingered in Western, Russian and Chinese minds. Why did a man at the head of a superpower undermine his own authority? Did he simply fail to understand the consequences of his actions, or did he act out of courage and vision? How did Mr Gorbachev, the peasant boy turned Communist Party boss in a fedora, become the statesman who liberated his people from 70 years of lies and fear, end the cold war and bury the Soviet Union? Was he a product of the Soviet system, as he claimed, or its “genetic error”, as Andrei Grachev, an earlier biographer described him? What made Gorbachev Gorbachev?

These are the questions William Taubman, an American political scientist, sets out to answer in his comprehensive and immensely readable account of Mr Gorbachev’s life. “Gorbachev is hard to understand,” the former Soviet leader told Mr Taubman, speaking of himself in the third person. The author applies a Tolstoyan lens to Russia’s recent history and displays particular sensitivity in his assessment of a life that would prove richer than politics. It is the logical continuation of Mr Taubman’s biography of Nikita Khrushchev, which won a Pulitzer prize in 2004.

Mr Gorbachev’s use of unnatural and hackneyed Soviet “newspeak” made him seem like an apparatchik. But beneath it was a bedrock of moral instinct and common sense that informed his choices far more than Marxist dogma and Soviet ideology. How did these normal human reflexes survive in a not entirely normal country?

Mr Taubman calls his first chapter “Childhood, Boyhood, and Youth” (from the title of Tolstoy’s semi-autobiographical trilogy), and glimpses some answers there. Mr Gorbachev was born in the village of Privolnoye, in Russia’s southern steppe, in 1931, a breaking-point in Russian history with more drastic consequences, in many ways, than those of the revolution of 1917. Stalin consolidated absolute power in his hands, and unleashed brutal collectivisation and a famine which claimed the lives of two of Mr Gorbachev’s uncles and an aunt and destroyed the Russian peasantry.

One of his grandfathers rejected collectivisation, kept an Orthodox icon in his house and was arrested in 1934 for not carrying out orders to sow; he had no seeds. The other was a communist who welcomed and assisted collectivisation, hung portraits of Stalin and Lenin on his wall and yet was arrested in 1937—to make up the quota for Stalin’s great purges. Miraculously, both grandparents survived. But the brutality of collectivisation and the story of how the communist grandfather was tortured left an enduring sense of injustice.

Another formative memory was that of war. Mr Gorbachev was ten when his father, a gentle and loving man, went to the front and his village was overrun by the Nazis. Mr Gorbachev’s father, mistakenly reported killed, eventually returned home in 1945. As Mr Taubman notes, the close escape of his grandparents and his father from tragedy-in-the-making instilled in the boy a sense of optimism and confidence that sometimes went too far. For all its hardship, he had a happy childhood.

He was proud that he could work with his father in the fields for 20 hours a day, caked in dirt and fuel, operating a huge combine harvester onto which he could clamber from any direction—“even where the reel was revolving and the cutters were gnashing their teeth.” Mr Gorbachev’s hard work was rewarded with the Order of the Red Banner of Labour, which helped him get into Moscow State University, where he met his wife, Raisa.

Mr Gorbachev began his professional life with a set of values that would later define his policies. He rejected physical violence as a way of ruling, believed in dignity and hard work, and respected private life. He was no dissident. Indeed, in many ways he was an exemplary Soviet man—hardworking, of peasant pedigree and lacking bourgeois instincts, such as a desire for private ownership. He believed (and still does) in the high principles of socialism, as preached and yet never practised by the Soviet regime. The paradox was that only a Soviet man who was determined to implement those principles without resorting to lies and violence could dismantle the Soviet regime.

The first attempt to give socialism a human face was made in Czechoslovakia in 1968 by Mr Gorbachev’s closest university friend, Zdenek Mlynar, and others. That it was crushed by Soviet tanks did not turn Mr Gorbachev from the idea of socialism, but made him all the more determined to try it again when he came to power nearly two decades later. Dismantling the Soviet Union was the last thing Mr Gorbachev wanted; he came to save it, not to bury it.

Ironically, it was the power of the general secretary and the party apparatchiks’ continued fear of offending him that allowed Mr Gorbachev to achieve what he did. He did not take over as party leader armed with a grand strategic plan (he would not have lasted long if he had). He simply wanted to improve the dismal living conditions of his countrymen, which mattered more to him than the Soviet Union’s geopolitical status as a superpower, which he took for granted. His instincts told him that if the country were relieved of excessive internal control and its long confrontation with the West, it would right itself under the continuing leadership of the party. His foreign policy flowed from that. It was his humanity rather than his often woolly statements that persuaded Margaret Thatcher that he was a man she could “do business” with.

Yet, revealing as the book is about Mr Gorbachev’s ability to overcome ideological dogmas that required squaring up to the West, it is equally revealing about how Western leaders were unable or unwilling to believe him. This became evident during the presidency of the elder George Bush, some of whose advisers, labelling themselves “realists”, argued that Mr Gorbachev’s reforms made him potentially more dangerous than his predecessors. He was, said Brent Scowcroft, Mr Bush’s national security adviser, “trying to smother us with kindness”.

Even when Mr Gorbachev accepted the fall of the Berlin Wall, the unification of Germany and ultimately its membership of NATO, Mr Bush would play to Mr Gorbachev’s weakness for wanting to be lionised, but felt no obligation to help Russia financially or accommodate him politically. “To hell with that! We prevailed. They didn’t. We can’t let the Soviets clutch victory from the jaws of defeat,” he said to Helmut Kohl, Germany’s chancellor. This triumphalism was misplaced and would later backfire on America.

Mr Taubman argues that those in power in the West lacked the vision and will to extend a Marshall-type plan to Mr Gorbachev’s Soviet Union (and later to Yeltsin’s Russia). Those who had it were no longer in power. In 1991 Mrs Thatcher appealed to Mr Bush: “We’ve got to help Mikhail…Just a few years back, Ron and I would have given the world to get what has already happened here.” If the West did not come to Mr Gorbachev’s aid, she argued, “history will not forgive us.”

Mr Gorbachev’s life—almost uniquely among Soviet leaders—did not end in office, and neither does Mr Taubman’s biography. Incomprehensibly, for modern Russian politicians, Mr Gorbachev emerged from his presidency almost empty-handed; he would earn money advertising Pizza Hut and Louis Vuitton handbags. But his biggest loss was that of his beloved wife and helpmate, Raisa, who died of leukaemia in 1999. In their last days together Mr Gorbachev, wearing a sterilised mask, held her in his giant combine driver’s arms, reminding her of their life together. Mr Gorbachev’s dignified retirement—far more than his politics—helps explain what made Gorbachev Gorbachev: a good man from the Soviet Union.

This article appeared in the Culture section of the print edition under the headline «The story of a good Soviet man».