During a start for the Yankees last week against the Baltimore Orioles, C. C. Sabathia took off his cap and looked inside. But something in there was missing, so he looked around, first examining the mound and then his cap again before realizing the thing he needed was stuck on his bald head.

His teammates Aaron Hicks and Mike Tauchman have been spotted doing the same in the outfield between batters: gazing into their caps. Relief pitcher Chad Green does not typically peer into his cap, but he was caught doing so a bit too long as he stepped off the rubber during a recent outing.

“My wife noticed and asked me, ‘What were you doing?’” Green said after the game. “Just double-checking things.”

No, they haven’t lost their minds. These small moments of apparent wardrobe examination are just byproducts of modern baseball. As loads of data have revolutionized the sport and the level of sophistication required to play each position has risen, more and more teams are employing positioning cards to guide their fielders through every game.

Infields have been altering their positioning based on their opponents for decades, but the frequency and precision have risen exponentially in recent years. Now the Yankees’ outfielders, too, carry cards with information on how to best situate themselves. Pitchers and catchers also use them, but as a reference guide for their complex signs. Some, like Sabathia, stash their cheat sheets in their caps, and others in their pants.

“People think I’m pulling my cellphone out of my back pocket,” outfielder Clint Frazier said.

Even after sending 18 players to the injured list this season, the Yankees, whose game on Thursday against the rival Boston Red Sox was rained out, have a 36-19 record, second best in the American League. The Yankees’ defense, despite some uneven stretches, has remained solid despite all the turnover.

For their outfielders, the cards tell them where to play relative to their teammates, based on a rival hitter’s tendencies versus a right- or left-handed pitcher. Reggie Willits, the Yankees’ first base coach and outfield instructor, said the cards are based on information provided by the team’s large analytics department. He adjusts them based on how opposing hitters have fared recently.

“Sometimes we’ll see stuff midgame, and the outfielders will make their adjustments,” Willits said. “When they come in, they’ll tell me what they saw, and I trust our guys, and they’ve got good instincts.”

Frazier, who has had several defensive lapses in the outfield, said the positioning cards had helped him make some catches he would not otherwise have made.

“Sometimes, hitters are going to hit the ball the opposite way of where the chart says,” he said. “It’s just one of those things where you tip your cap. But I’m just following the sheet, because I’ve had my struggles in the outfield as it is. And I’m going to keep following that sheet.”

Brett Gardner, the Yankees’ most veteran outfielder, said the practice of using the cards had begun about four years ago, and he noted that they might be more useful for outfielders than for infielders. 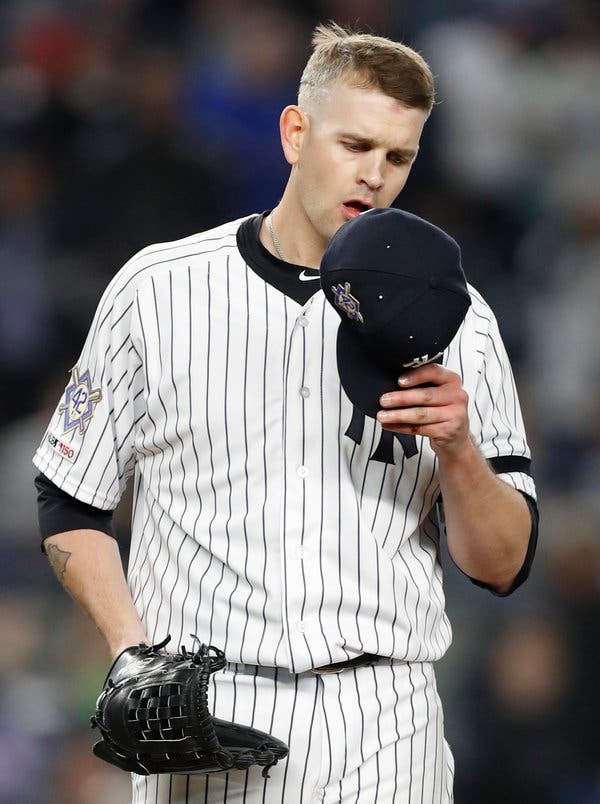 “It’s hard to communicate out there sometimes,” he said. “It’s loud. And it’s hard to tell somebody to move 15 feet. If they have that, we all have to be accountable and look at it and know what’s going on from pitch to pitch to batter to batter. It helps.”

Sabathia and Green, of course, are not worried about their positioning on the mound. Since Major League Baseball limited mound visits to six for a nine-inning game before the 2018 season and dropped it to five before 2019 to improve the pace of play, teams began using cards as a reminder for pitchers and catchers, helping them keep their signs for pitches straight.

With rising fears that signs are being stolen and new procedures to crack down on the use of technology, the pitcher-catcher cards allow them to quickly and discreetly change up their communication.

“It’s better that way,” said Gary Sanchez, who, like his fellow catcher Austin Romine, wears his card on a wristband. “It’s served us well.”

James Paxton, the Yankees starting pitcher who returned from the I.L. on Wednesday, keeps his card in his cap. And if he wants to switch the signs, he simply signals to Sanchez or Romine which variation on the card to employ.

“If we think they have something on us, we can switch it multiple times an at-bat, or each hitter,” he said. “It just depends on what we’re feeling. There’s a lot of different sets on there that we can go to.”

The only people who know which signs are being used are the pitcher and the catcher, Larry Rothschild, the Yankees’ pitching coach, said.

“It just simplifies things and it’s quick,” he said. “Other than it getting stuck on your head, it works pretty fast.”

As for the infielders’ cards, Carlos Mendoza, the Yankees’ quality control coach and infield instructor, combines the data with what he has gleaned from video and the opponents’ spray charts along with the tendencies of his own pitchers.

Infielder Thairo Estrada and shortstop Gleyber Torres, who keeps his card in his back pocket, check the cheat sheet during games. D. J. LeMahieu, an experienced, sure-handed defender, looks at it before a game but rarely during it.

“We’re moving around so much every pitch that we kind of look at each other and look at Mendy, and we kind of get the plan from that,” he said, referring to Mendoza.

Mendoza said infielders were not wedded to the cards, or to his direction. If they notice the pitcher altering a game plan or a hitter’s tendencies changing, they are allowed to do the same.

“There’s a lot of information now,” he said. “But you have to give credit, because at the end of the day, it’s on the players. They’ve got all the freedom to make adjustments. And we discuss in between innings when they come in, ‘Hey, what do you see?’ And it’s been good.”