For the first time in more than a quarter-century, a Red Sox-Yankees series opened with both teams’ fanbases seemingly in near-panic mode. With the Red Sox at 6-11 and the Yankees at 6-9 in the standings on Tuesday morning, this was the first time since the final weekend of the 1992 season that the two rivals matched up with both teams at least three games under .500. To put that into perspective, Derek Jeter was three months removed from being drafted and had just completed his first pro season with the Gulf Coast Yankees and Greensboro Hornets.

The offensive star was Mike Tauchman, who had a career night with a double, homer and four RBI. Entering the game, he had zero homers and two RBI over 87 plate appearances in his first 61 big-league games. Congrats, Mr. T (ok, bad nickname), you earned our Obscure Yankeemetric of the Series: Tauchman is one of just three left-fielders to drive in at least four runs against the Red Sox in the last 20 seasons. The other guys? Hideki Matsui (July 25, 2004) and Alfonso Soriano (August 16, 2013). And, of course, we have this Fun Fact:

Paxton was the difference-maker, though, aggressively attacking the Red Sox with his electric four-seamer and sharp cutter. He tossed eight scoreless innings with just two hits allowed and 12 strikeouts. How good was his gem?

Yankees capped off their first series win at Yankee Stadium and a fun mini-sweep of their rivals with a thrilling comeback win, 5-3. The victory was made even sweeter as it pushed the Red Sox further into the American League basement. The only teams with a worse record than the Red Sox (6-13) this season are the Marlins (4-15) and Reds (5-12).

J.A. Happ put the Yankees in an early 3-0 hole, coughing up two homers in the first two innings. He settled down after that rough start, though, allowing just three hits and no runs over the next four-plus innings. For the first time this season, he gave the Yankees length and pitched into the seventh after not completing the fifth inning in any of his first three outings.

Brett Gardner — who entered Wednesday hitless in 11 at-bats with runners in scoring position this season — rescued the Yankees from a bitter loss when he drilled a fastball for a grand slam in the seventh inning, flipping a 3-1 deficit into a 5-3 advantage. The pitch was a gourmet cheese-stuffed meatball served on a silver platter to Gardy: 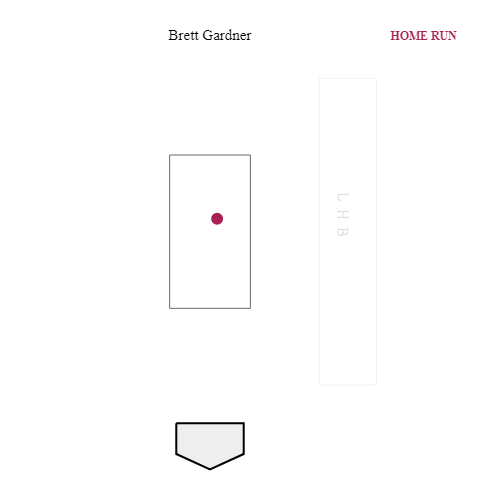 He’s now is this select group of Yankees that have terrorized the Red Sox with late-game-changing slammer:

Go-Ahead Grand Slam vs Red Sox in 7th inning or later since 1925:

But perhaps most impressive for Gardner is this note: he is the second player in franchise history to compile at least 100 dingers and 250 steals in their pinstriped careers. You might have heard of the other guy — Mr. Derek Jeter.