NATO ally Albania stands out as the only country of the 29 where the U.S. earns majority approval — and it typically gives the U.S. some of its highest marks — but the 56% of Albanians who approve of U.S. leadership is also a new low.

The declines in U.S. leadership approval come in a tumultuous year for most countries. Amid the chaos of the COVID-19 pandemic, the U.S. continued to disengage from the world stage, including pulling out of the World Health Organization over the summer. Around the same time, the U.S. also pledged to withdraw troops from Germany, where approval dropped to a record-low 6% — notably tying it with Iran (6%) and Iceland (5%) for the lowest approval ratings. 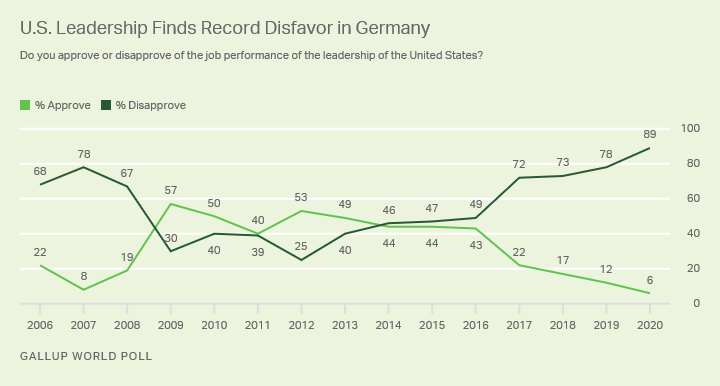 However, the news was not all bad. Ratings of U.S. leadership improved to their highest levels during the Trump administration in a handful of countries. Although nowhere near majority level nor their previous record highs, approval ratings in Ecuador (43%), Japan (39%), Australia (29%), New Zealand (26%), and Russia (18%) were at their highest level since 2017. Ratings in Russia notably more than doubled, rising from 8% approval in 2017 to their current level. However, disapproval among Russians was also the highest of the Trump presidency. 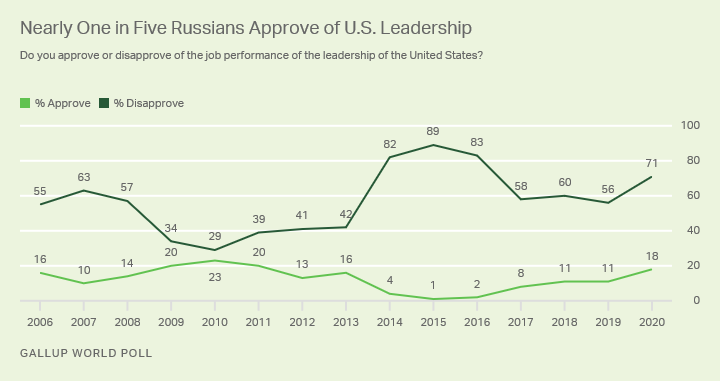 The leadership rankings of these four countries so far in 2020 look much like they did in 2019, with Germany firmly on top, and the U.S. clustered with China and Russia.

It’s too early to say that the U.S. is on tap to see its worst rankings ever for any year and what effect the U.S. election could have on the image of U.S. leadership. The global picture should be clearer by Inauguration Day in 2021 when most of Gallup’s 2020 fieldwork in nearly 100 more countries should be complete.

However, as it stands today, President-elect Joe Biden will have a lot of repair work to do when he takes office in late January — perhaps even more work than awaited President Barack Obama when he took over from a highly unpopular President George Bush.

Since Biden left office as vice president, approval ratings of U.S. leadership have dropped 51 percentage points among long-time ally Portugal, 44 points in the United Kingdom and 37 points in Germany. But Obama overcame similar deficits when he took office, which shows that it can be done.

Learn more about how the Gallup World Poll works.