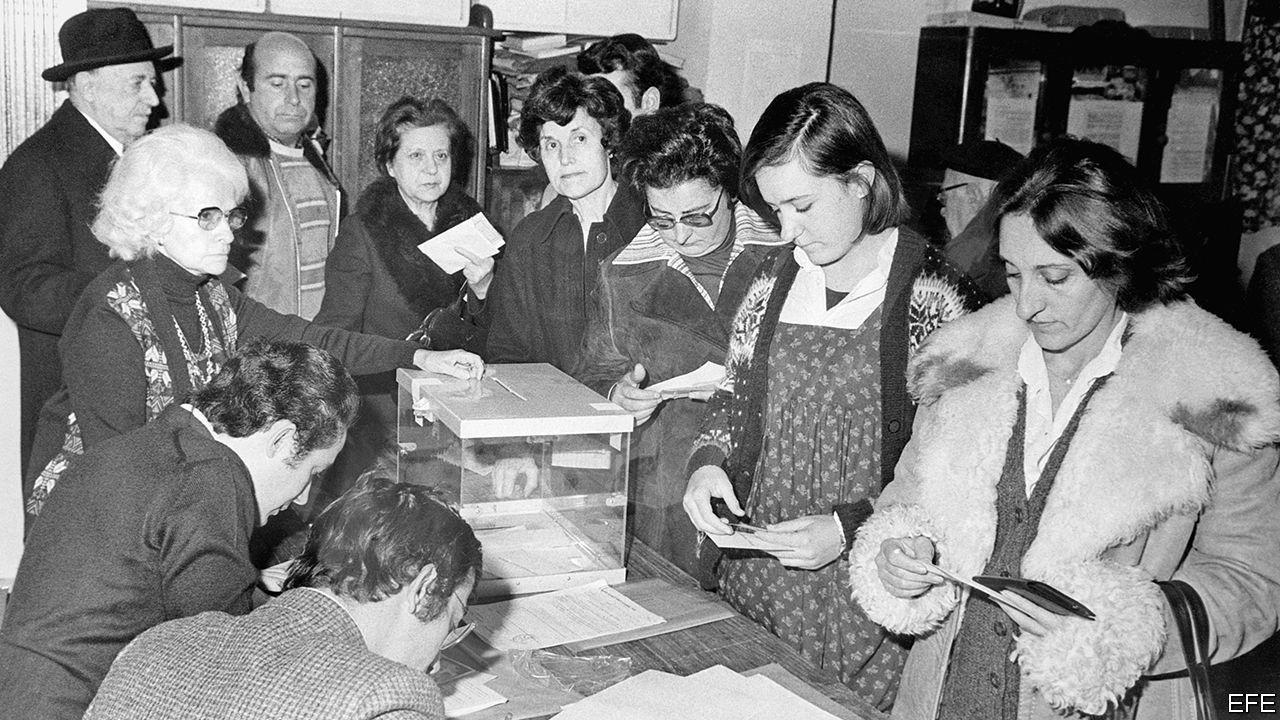 MANY OF THE photos seem older than they are. In black and white, they show Spaniards wrapped in overcoats, the men with sideburns, the women with perms, voting in a referendum on a new constitution on December 6th 1978. Some 67% of the electorate turned out, of whom 87% voted yes, setting the seal on their country’s swift move to democracy after the death of Francisco Franco, its long-standing military dictator.

The constitution has helped to bring Spain the best years since its Golden Age in the 16th and 17th centuries, when it dominated the world. That heyday had been followed by centuries of decline and political instability. Between 1812 and 1975 Spain saw six different constitutions, seven bloodless military coups, four royal abdications, two dictatorships and four civil wars. In the last and worst of those, in 1936-39, around 600,000 people died after General Franco rose against a chaotic parliamentary republic, and Hitler, Mussolini and Stalin intervened.

Since 1978 Spain has transformed itself into a stable and prosperous democracy. Yet the past decade has been difficult. The global financial crisis in 2007-08 hit the country hard, triggering a prolonged slump. Since 2014 the economy has enjoyed a robust recovery. Helped by low European interest rates and (until recently) cheap oil, that is mainly because the conservative government of Mariano Rajoy, elected with an absolute majority in 2011, pushed through sweeping reforms of the labour market and the banks. After a period of unpopular austerity, the economy in mid-2017 surpassed its peak size of 2007. The most promising change is what a group of economic researchers calls “Spain’s export miracle”. A new, more outward-looking, higher-value economy is emerging.

The social scars of the financial crisis, however, will take longer to heal. “Spain was very egalitarian, with a strong sense of equality of opportunity and constant progress since the 1960s,” says Charles Powell of the Elcano Royal Institute, a think-tank in Madrid. “A lot of the middle class now feel that their children will be poorer than them.” Their disillusionment has changed politics. Spain is not alone in suffering “a crisis in the governance of representative democracy”, according to Felipe González, who served as prime minister in Socialist governments in the 1980s and 1990s. This has given rise to “the politics of rancour”, he says. In 2011 crowds of young people (dubbed los indignados) occupied city squares across the country, claiming that politicians had become self-serving and corrupt. The indignation was at its most virulent in Catalonia, one of Spain’s richest regions, where nationalist parties embraced separatism.

Public anger eventually spawned two new parties: Podemos (We Can) on the populist left and, on the centre-right, Ciudadanos (Citizens), which began as an anti-nationalist party in Catalonia. They ate away at the votes of the two main parties, the Socialists (PSOE) and Mr Rajoy’s People’s Party (PP). Elections in 2015 and 2016 returned hung parliaments. To avoid yet another election, the Socialists in 2016 allowed Mr Rajoy to form a minority government, with help from Ciudadanos.

Though he applied himself doggedly to hauling Spain out of its economic slump, Mr Rajoy paid little attention to anything else, including discontent in Catalonia. Following a string of corruption scandals within the PP, on May 24th a court concluded that the party had benefited from illegal financing and that Mr Rajoy’s evidence as a witness lacked credibility. The Socialist leader, Pedro Sánchez, seized the opportunity to file a censure motion. With the backing of Podemos and the Catalan and Basque nationalists, it passed with 180 to 169 votes. Mr Sánchez was swept to prime-ministerial office, heading a Socialist government with just 84 seats.

Because of his age (46) and his fresh approach, Mr Sánchez can claim to represent political renewal. Until a few months ago he was widely regarded as an erratic apparatchik. Yet in his clinical dispatch of Mr Rajoy he showed daring and shrewd political instincts. He has appointed 12 women to a cabinet of 17. He has said he wants to govern for the remainder of the parliament, until June 2020, and can probably count on broad support from Podemos. But he could opt to call an election much sooner.

Whenever that comes, it seems unlikely that Mr Sánchez can win a majority for the Socialists even if he makes a success of his term in office. Across the political spectrum, many believe that the new four-party system is here to stay. That will require national politicians to learn the habit of coalition politics, which is already being practised at regional and municipal levels.

Continuing political deadlock would come at great cost. Spain needs further reforms. It suffers from skills mismatches, a flawed education system, a generation gap and an ageing population. Its public administration, at all levels, is marred by cronyism and inefficiency. Above all, the politicians must deal with Catalan separatism and, more broadly, some accumulated flaws in the sweeping decentralisation mandated by the constitution.

In September 2017 Carles Puigdemont, the president of the Generalitat (the Catalan government), pushed laws to “disconnect” Catalonia from Spain through his parliament, calling a “binding” referendum on independence for October 1st. These laws violated both Catalonia’s statute of autonomy (home rule) and the constitution, article 2 of which proclaims “the indissoluble unity of the Spanish nation”.

Mr Rajoy’s response was to send in riot police to try to stop the referendum, a public-relations disaster for Spanish democracy. According to the Catalan authorities’ (unverifiable) count, 43% of the electorate turned out, of whom 92% (or over 2m people) voted in favour of leaving. The Catalan parliament declared independence on October 27th. Even as a euphoric crowd celebrated in Barcelona, the Senate in Madrid approved direct rule in Catalonia under article 155 of the constitution—an unprecedented step. Mr Puigdemont and some of his councillors fled abroad.

The half of Catalonia’s population that wants to stay in Spain took to the streets to protest against independence, and more than 4,000 businesses moved their legal domicile out of Catalonia. A Supreme Court justice has charged Mr Puigdemont and 24 other separatist leaders with offences ranging from rebellion to misuse of public funds. Nine are in jail, pending trial. But the case all but collapsed this month after a German court rejected a request to extradite Mr Puigdemont for rebellion.

All this smacked of a wild judicial overreaction by the Spanish state, but Mr Puigdemont’s actions had been highly provocative. Officials in Madrid insist that no other continental European democracy would have acted differently if faced with such defiance. But many in Spain also blame Mr Rajoy for failing to come up with a more imaginative political response, and for allowing things to get so far out of hand in the first place.

Catalonia poses questions that matter for Europe as well as for Spain. It represents a clash of two conceptions of democracy. Mr Puigdemont’s is plebiscitarian and based on popular mobilisation, whereas Spain’s constitutionalist politicians defend a representative democracy that is anchored in the rule of law and respects minority rights. At issue, too, is what it means to be a nation, and whether that should be an overriding identity in 21st-century Europe. “The right to decide” is a simple and seductive slogan. But international law recognises a right to self-determination only in cases of colonisation, invasion or gross denial of human rights. None of these applies in Catalonia.

Special report: Spain’s democracy is about to turn 40. How well has it worn?

More in this special report: