MINNEAPOLIS — The phone call came in early December, in the dead of baseball’s off-season, when players are on vacation and recovering from the grueling season. Yankees infielder Gleyber Torres, though, was ready to start training.

The Yankees’ loss to the Boston Red Sox in the first round of the 2018 playoffs was bothering Torres. As did his miscues, particularly on defense at second base and shortstop, during his rookie season. So he called Carlos Mendoza, the team’s infield instructor, and told him he wanted to start working at the Yankees’ spring training complex in Tampa, Fla., where Torres lives in the off-season.

“I know it’s early, but I just want to prepare,” Torres, 22, told Mendoza, who also lives in Tampa. “I just want to clean everything up.”

Ten months later, as he enjoyed the Yankees’ dismantling of the Minnesota Twins during a raucous clubhouse celebration on Monday, Torres recalled what had helped him propel his team to the American League Championship Series: All of those ground balls and all of those swings on a minor league field, five days a week beginning in early December, two months before spring training began.

The sessions usually included Marcus Thames, the Yankees’ hitting coach who flipped countless balls for Torres to hit; Mendoza, who hit Torres ground balls and threw him batting practice; and a few trainers and strength and conditioning coaches who made sure Torres did not work himself into the ground.

“This has been a year’s work,” Mendoza said, standing in the visitor’s clubhouse at Target Field after Monday’s game, while Torres celebrated nearby. “He experienced the playoffs last year and he was left with a sour taste. He showed up to the complex and he was hungry.”

As players have gotten increasingly better at younger ages with improved development programs around baseball — and teams have leaned more and more on that cheaper, more sprightly talent — Torres has been one of the best. He is already a two-time All-Star. The only other Yankees to make multiple All-Star teams before turning 23? Mickey Mantle and Joe DiMaggio.

Torres’s improvements as a hitter showed against the Twins. He went a team-best 5 for 12 with four runs batted in and he struck out just twice — an aspect of his game he specifically targeted this year. “If the pitchers don’t throw me anything close, I’m just waiting, and I know guys behind me can do the job,” he said of his patience at the plate.

He was calm in big situations during the regular season — he was the Yankees’ best hitter with runners in scoring position — and, again, against the Twins. On Monday, he smacked a home run and two doubles, connecting on pitches he had missed earlier in at-bats.

“He’s smart and he’s confident — and that’s a really good combination when you’re talented,” Yankees Manager Aaron Boone said over the weekend. “He’s shown an ability to make adjustments, to understand what teams and pitchers are doing to him.”

Torres’s defensive work also showed in the A.L.D.S. On Monday, he saved a run with a stellar sliding stop-and-throw from right field in the fifth inning of a two-run game. His all-around performance earned him the team’s player-of-the-game belt.

«Tonight is played already, we go to the next series. LET’S GO!!!!» 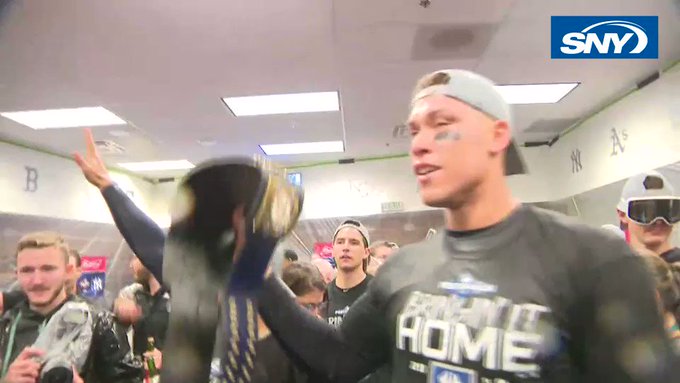 “I’ve never seen anything like Gleyber, especially at his age, 22. To be doing what he’s doing in the big leagues is something that’s unheard of,” the Yankees’ star outfielder Aaron Judge said recently. “When I was 22, I was playing in A-ball in Charleston, South Carolina — not nearly on as big a stage and facing the best arms in the biggest situations in the world.”

Although Torres, who was born in Venezuela, dealt with some minor injuries during the regular season, he was the only player from the opening day lineup to avoid the injured list — a notable accomplishment given the Yankees’ injury-marred season. Only infielder D.J. LeMahieu, another All-Star, appeared in more games: 145, one more than Torres. Torres did lead the Yankees in one big category: home runs, with 38 — the most among major-league middle infielders.

“He does it with a smile,” Yankees General Manager Brian Cashman, who traded for Torres in 2016, said after Monday’s victory. “You see the personality playing out while he’s consistently having success. It’s a talent that very few possess.”

With Monday’s showing, Torres became the second-youngest player ever to collect three extra-base hits in a postseason game. Only Houston’s Carlos Correa, who was 21 when he hit a double and two homers during Game 4 of the 2015 A.L.D.S., did so at a younger age. Despite the fixation on his youth, Torres said that when he was born didn’t matter.

“It’s not about my age,” he said, adding later, “I’m focused on doing my job and helping my team in any situation.”

During Monday’s postgame celebration, Torres did admit that he felt a tad younger than 22. After all, he is seven years younger than the average age of the Yankees’ 40-man roster. In fact, Judge, 27, the face of this Yankees team, has already declared Torres as the future of the franchise. Torres certainly carries himself in the Yankees’ mold: He doesn’t ruffle any feathers and behaves professionally.

And when Boone has urged Torres to improve at the margins of his game, such as refining his footwork on defense or sharpen his focus during a game, Torres has taken the challenge to heart.

“The concentration from pitch to pitch, not just on defense but on offense, Gleyber Torres won every pitch in this series,” Mendoza said. All those days on the back fields in Tampa had indeed paid off.