During the years that shaped modern Miami, Mayor Maurice A. Ferré held on to power for more than a decade despite race riots, a chaotic mass migration of Cubans arriving by boat and the unpredictable boom-and-bust cycle of neighboring Latin American economies.

But Mr. Ferré, Miami’s first Hispanic mayor, ultimately could not withstand the city’s demographic transformation. A Puerto Rican, he lost his mayoralty in 1985, two years after a rival introduced the campaign slogan “Cubano vota cubano” — a Cuban votes Cuban. Defeated in his re-election bid, he was succeeded by Xavier Suarez, the city’s first Cuban-born mayor.

Mr. Ferré, who led Miami through a defining period of growth and tumult beginning in 1973, died on Thursday at his home in the Coconut Grove neighborhood of the city. He was 84.

The cause was cancer, according to a family statement.

Mr. Ferré had been sick for two years, and his treatment forced him to rely first on a walker and then on a wheelchair. But he still showed up at City Hall in recent years, in one instance to oppose a plan to develop a waterfront park that had been renamed in his honor. And he urged local Democrats not to take Latino voters for granted in 2020.

When Mr. Ferré was first elected to city government in 1967, only 3 percent of Miami’s registered voters were Hispanic. By the time he left the mayor’s office, the figure was 40 percent. Hispanic voters now make up 58 percent of the total.

“The thing they say about me is that I was a visionary,” Mr. Ferré, a Democrat, said in an interview at his home in April. “The truth of the matter is, what I really have is a nose — the old bloodhound nose of sensing things, the ability to foresee how people will react under certain circumstances.”

Maurice Antonio Ferré was born on June 23, 1935, in Ponce, P.R., to José Antonio Ferré, a scion of a prominent industrialist family, and Florence (Salichs) Ferré, a homemaker who had moved to Puerto Rico from New York when she was younger. In 1968, Luis A. Ferré, his uncle, was elected governor of Puerto Rico. Mayor Ferré was long a vocal proponent of Puerto Rican statehood. 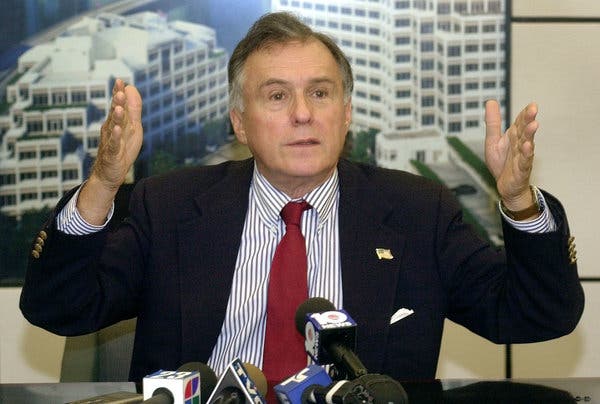 The Ferrés made their wealth in ironworks and sugar. Mr. Ferré’s parents sent him to the Lawrenceville School, a boarding school in New Jersey. He was accepted to the University of Pennsylvania to study architecture, but by then his father had bought a house in Miami, on an exclusive stretch of Brickell Avenue, and Mr. Ferré’s mother asked him to come home. He enrolled in the University of Miami and graduated with a degree in architectural engineering in 1957.

While still a teenager, Mr. Ferré met María Mercedes Malaussena, a young Venezuelan who lived next door to his parents on Brickell and who would become an artist. They were married in Caracas, the capital of Venezuela, in 1955.

A sixth son, Francisco Ferré, was among about 150 people who died in 1995 when American Airlines Flight 965from Miami crashed in a mountainous area of Colombia. Francisco’s wife and 3-month-old son also died in the crash. Maurice Ferré, then a Miami-Dade County commissioner, flew to Colombia and identified the remains.

Once out of college, Mr. Ferré worked for the family business, which by 1960 had expanded into the cement industry. He was head of the company at the center of their holdings, Maule Industries, when it went into bankruptcy in 1975 after an ill-timed expansion attempt collapsed during a recession.

Mr. Ferré won a seat in the Florida House of Representatives in 1967. But he quickly jumped to the Miami City Commission, where he proved to be a savvy operator who could cater by turns to the city’s white, black and Hispanic populations.

As mayor, his powers were limited. But as the only Latino mayor of a major American city at the time, Mr. Ferré, who was bilingual, gained national exposure. He called police officers “bums” — and then apologized — in 1980 after they had vandalized looters’ cars during rioting that broke out when a jury acquitted four white Miami police officers in the killing of Arthur McDuffie, a black insurance executive. In 1981, he denounced the detention of hundreds of Haitian migrants under a Reagan administration policy to stem the flow of so-called boat people to the United States.

Mr. Ferré attempted a political comeback three times after leaving office but lost each time — in bids to regain the mayoralty in 1987 and 2001 and to win a United States Senate seat in 2010.

Mr. Ferré remained committed to achieving statehood for Puerto Rico. In 1977, that effort took him to United Nations headquarters in New York, where he delivered a speech accusing the United States of treating the island like a colony. It was an unusually blunt assessment at the time for a Puerto Rican official on the mainland, and his uncle, the former governor, was not thrilled.

“He was livid with me,” Mr. Ferré recalled in the April interview. “He said, ‘What are you doing?’ It could antagonize Washington.”

Mr. Ferré predicted that the statehood movement would finally find friendly lawmakers in Congress once heavily Latino states like Texas elected Democrats sympathetic to adding a Hispanic-dominant state to the union, perhaps after 2024.

“In the meantime,” Mr. Ferré lamented before he died, “there is no solution for Puerto Rico.”

Patricia Mazzei is the Miami bureau chief, covering Florida and Puerto Rico. Before joining The Times, she was a political writer for The Miami Herald. She was born and raised in Venezuela, and is bilingual in Spanish.