WASHINGTON — He drove them crazy. He berated them on the way to the White House and badgered them once they got there. He stood by them when he thought they were right and tore at their heels when he was convinced they were wrong. And when it came time to depart this world, John McCain wanted them to tell his story.

Former Presidents George W. Bush and Barack Obama, the two men who thwarted Mr. McCain’s ambitions to become commander in chief, stood one after the other before the nation’s elite at Washington National Cathedral on Saturday to honor the man they beat, extolling him as a one-of-a-kind figure the likes of which will not be seen again anytime soon.

That they were asked, and not the current president, spoke volumes about the man and the moment. And while neither explicitly mentioned President Trump, who, uninvited and unwelcome, went golfing instead, their tributes could hardly be heard without the unspoken contrast to the current occupant of the Oval Office, a message amplified by a more overt rebuke from the senator’s daughter.

“So much of our politics, our public life, our public discourse, can seem small and mean and petty, trafficking in bombast and insult, in phony controversies and manufactured outrage,” Mr. Obama said. “It’s a politics that pretends to be brave, but in fact is born of fear. John called us to be bigger than that. He called us to be better than that.”

Mr. Bush praised Mr. McCain for his “courage and decency,” an exemplar of the storied American values of standing up to bullying and oppression. “If we are ever tempted to forget who we are, to grow weary of our cause, John’s voice will always come as a whisper over our shoulder — we are better than this, America is better than this,” Mr. Bush said.

If their better-than-this eulogies were widely seen as an implicit reproach of Mr. Trump, Meghan McCain left no mystery who she had in mind with a powerful, emotional, sobbing remembrance of her father that also sounded like a defiant cri de coeur against the tycoon-turned-president who once belittled the senator’s wartime service.

“We gather here,” she said, “to mourn the passing of American greatness — the real thing, not cheap rhetoric from men who will never come near the sacrifice he gave so willingly, nor the opportunistic appropriation of those who lived lives of comfort and privilege while he suffered and served.”

Mocking Mr. Trump’s favorite slogan, she later declared: “The America of John McCain has no need to be made great again because America was always great.” The audience then burst out in applause, something that rarely happens during the traditionally solemn funerals held at the cathedral.

While Mr. Trump was absent, political figures from both parties made their way to the house of worship on a dreary, overcast and humid morning. They came to bid farewell to John Sidney McCain III, son and grandson of admirals, naval aviator, tortured prisoner, congressman, six-term senator, two-time presidential candidate, patriot, maverick, reformer, warrior, curmudgeon, father, husband and finally, in death, American icon.

They also came to mourn an ideal that he represented and a town that he once dominated with verve and humor and memorable flashes of temper. Like Mr. McCain, many of the Republicans who attended have found themselves deeply discouraged by their own party’s president. But unlike Mr. McCain, most of them do not say so out loud, for fear of rage by Twitter or retribution by the base. It was almost as if it were a meeting of Washington’s political underground, if the underground met in a grand cathedral with 10,650 organ pipes.

For his part, Mr. Trump spent the morning railing again on Twitter about his opponents, the news media and the investigation into his campaign’s interactions with Russia during the 2016 election.

In his eulogy, former President Barack Obama deplored “a politics that pretends to be brave, but in fact is born of fear,” adding, “John called us to be bigger than that.” Credit Tom Brenner for The New York Times

He quoted supporters asserting that the inquiry was rigged “to spy on Barrack Obama and Hillary Clinton’s political opponent” (misspelling his predecessor’s name) and that “this is the scandal here — a police state.” He complained about “corruption at the DOJ & FBI” and said the news media “has become tainted and corrupt!”

On his way to his Virginia golf club, he unleashed a few more combative tweets threatening to terminate a trade agreement with Canada and warning that “Congress should not interfere w/these negotiations.” By the end of the day, in a possible rejoinder to Ms. McCain, he tweeted in all caps: “MAKE AMERICA GREAT AGAIN.”

Standing in for Mr. Trump at the cathedral were his daughter Ivanka Trump and son-in-law, Jared Kushner, as well as his chief of staff, John F. Kelly, and national security adviser, John R. Bolton, seated not far away from former President Bill Clinton and former Secretary of State Hillary Clinton. Rudolph W. Giuliani, the president’s lawyer and a longtime political ally of Mr. McCain’s, also attended.

Mr. McCain, who died last weekend at 81, directed his own farewell with the same contrarian spirit that flavored his political career, and it came off just as he would have wanted. The two-and-a-half-hour ceremony blended the majesty of the officially designated national house of prayer, the discipline of his cherished Naval Academy and the unabashed, unapologetic patriotism of a Fourth of July fireworks display.

As he battled brain cancer, Mr. McCain told his advisers months ago that he wanted Mr. Bush and Mr. Obama to speak at his funeral, then called each of them to make the request. The point was to emphasize the common values that they shared despite their differences.

Mr. Obama admitted to a “certain surprise” when Mr. McCain called to ask him to speak at his service, but said he came to realize it demonstrated the senator’s relish for unpredictability, disdain for self-pity, largeness of spirit and mischievous streak.

“After all,” Mr. Obama said, “what better way to get a last laugh than to make George and I say nice things about him to a national audience?”

The former president noted that despite their debates, he and Mr. McCain shared a commitment to overhauling immigration and campaign finance laws, and he praised the senator for his fidelity to American principles like the rule of law and a free press.

He recalled that during their 2008 contest, Mr. McCain corrected a supporter who denounced Mr. Obama as an Arab. “I was grateful, but I wasn’t surprised,” he said. “I never saw John treat anyone differently because of their race, or religion, or gender.”

That did not mean they agreed all the time, he noted. “It’s no secret, it’s been mentioned, that he had a temper,” Mr. Obama said, “and when it flared up, it was a force of nature, a wonder to behold — his jaw grinding, his face reddening, his eyes boring a hole right through you. Not that I ever experienced this firsthand, mind you.” 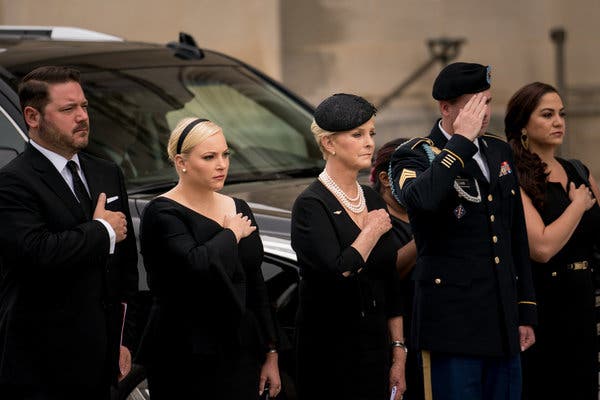 Mr. McCain’s family members waiting for his coffin outside the cathedral. His daughter Meghan, at left, offered a powerful, emotional remembrance that also seemed like a defiant cri de coeur against President Trump. Credit Erin Schaff for The New York Times

Mr. Bush, who refused to vote for Mr. Trump in 2016, was more oblique in his talk than Mr. Obama, but his description of his onetime rival still struck many in the audience as a contrast to the current president. “Perhaps above all, John detested the abuse of power,” Mr. Bush said. “He could not abide bigots and swaggering despots. There was something deep inside him that made him stand up for the little guy — to speak for forgotten people in forgotten places.”

Mr. Bush defeated Mr. McCain for the Republican presidential nomination in 2000 after an acrid campaign, and the two clashed regularly over the next eight years, perhaps most notably over the issue of torture. Mr. McCain forced Mr. Bush to accept legislation intended to ban the use of waterboarding and other harsh interrogation methods.

But when the war in Iraq went badly and Mr. Bush was abandoned by virtually everyone, Mr. McCain stuck with him and supported a surge of troops and strategy shift that helped turn the war around.

Mr. Bush acknowledged their tense history but said it eased after he left office. “In recent years, we sometimes talked of that intense period like football players remembering a big game,” he said. “In the process, rivalry melted away. In the end, I got to enjoy one of life’s great gifts: the friendship of John McCain. And I will miss him.”

Mr. McCain’s flag-draped coffin was taken by motorcade on Saturday morning from Capitol Hill to the cathedral, stopping along the way at the Vietnam Veterans Memorial, where Cindy McCain laid a wreath in honor of her husband, whose five and a half years of captivity during that war vaulted him to national prominence.

At the cathedral, the coffin was brought into the vast chamber and a bourdon bell tolled. The United States Naval Academy Glee Club and Navy Band Brass Ensemble performed music that included the Navy Hymn, “My Country, ’Tis of Thee,” “Amazing Grace” and “America the Beautiful.”

At Mr. McCain’s request, former Senator Joseph I. Lieberman, an independent Democrat from Connecticut, and former Secretary of State Henry A. Kissinger also spoke. Mr. McCain said earlier this year that he wished he had picked Mr. Lieberman as his running mate in 2008 instead of Sarah Palin, who was not invited to Saturday’s service.

The honorary pallbearers were a who’s who of the senator’s life and across-the-aisle friendships, including former Vice President Joseph R. Biden Jr., former Mayor Michael R. Bloomberg of New York, the actor Warren Beatty and a bevy of current and former senators, advisers, fund-raisers and friends. A prominent Russian dissident, Vladimir Kara-Murza, was also included, underscoring the senator’s longstanding opposition to the authoritarian government of President Vladimir V. Putin.

The senator’s remains will be interred on Sunday at the United States Naval Academy Cemetery, next to his lifelong friend and 1958 academy classmate, Adm. Charles R. Larson.

“Home is the sailor,” Stevenson wrote, “home from the sea.”