Three months after Hitler came to power in Germany, the British ambassador in Berlin dispatched a prescient 5,000-word report to London. Having just read “Mein Kampf,” Sir Horace Rumbold correctly saw the book as Hitler’s master plan for the conquest of Europe. To his superiors, Rumbold outlined how the German leader planned to pick off countries one by one, all the while promising that his latest victim would be his last. 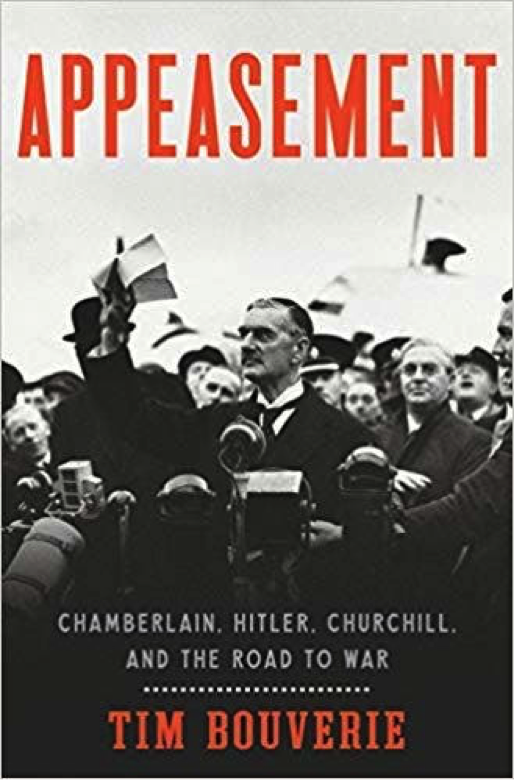 In “Appeasement,” Tim Bouverie notes that Rumbold’s April 1933 dispatch caused a momentary stir in the Foreign Office. But the ambassador’s warning, like later admonitions from Winston Churchill and others, made no dent in the British government’s unflagging commitment to come to terms with Hitler, no matter the consequences.

Bouverie, a former British television journalist, offers few fresh details or insights into Britain’s disastrous appeasement policy — a subject that has been exhaustively mined in a plethora of previous books. Nonetheless, living as we do in an era with uncomfortable parallels to the political turmoil of the 1930s, “Appeasement” is valuable as an exploration of the often catastrophic consequences of failing to stand up to threats to freedom, whether at home or abroad. Particularly timely is the book’s examination of Neville Chamberlain. It highlights the dangers to a democracy of a leader who comes to power knowing little or nothing about foreign policy, yet imagines himself an expert and bypasses the other branches of government to further his aims.

Throughout his minutely detailed survey, Bouverie rightly rejects the arguments of revisionist historians who claim that Britain’s lack of military preparedness, as well as the strength of pacifist public opinion, justified its determination to offer repeated concessions to Hitler. In fact, from the early 1930s, British leaders, fearful of further damaging their Depression-afflicted economy, fought to keep military spending to a minimum. They then used the country’s military deficiencies as an excuse to turn a blind eye to Germany’s increasing aggression and explosive rearmament, a flagrant violation of the 1919 Versailles Treaty.

When German troops breached the treaty again by occupying the demilitarized Rhineland in 1936, Britain refused to join France, whose territory bordered the Rhineland, in demanding Germany’s withdrawal. The British government seemed to share the mind-boggling rationale offered by one prominent journalist that “Germany will be less of a danger to peace when her neighbors are less obviously stronger than she is.” Soon after the Rhineland incursion, British leaders sent a plaintive letter to Hitler asking which treaties he would be willing to respect. They never received an answer.

Although Britain’s appeasement toward Germany began before Chamberlain became prime minister in 1937, he was its high priest throughout. As chancellor of the Exchequer for most of the 1930s, he oversaw the government’s strict budgetary limits on rearmament. According to one associate, Chamberlain, a former businessman who had spent two years as mayor of Birmingham, thought of Europe as simply “a bigger Birmingham.” He convinced himself that if he dealt with Hitler in a “practical and businesslike” way, he could convince the Führer of the efficacy of peace and bring him to heel.

Chamberlain clung to that delusion even as Hitler annexed Austria in March 1938 and, two months later, demanded that Czechoslovakia, Eastern Europe’s only democracy, surrender the Sudetenland, a vital area containing most of the country’s formidable defense fortifications and major centers of industry. Czechoslovakia refused and mobilized its highly trained, well-equipped army to counter a German invasion; France, which had a military treaty with the Czechs, did the same.

But when Chamberlain refused to join the French premier, Édouard Daladier, in confronting Hitler, Daladier fell into line. At the Munich conference in September 1938, the British and French leaders strong-armed the Czechs to give in to German demands. In defense of his betrayal of a fellow democracy, Chamberlain, like later defenders of appeasement, argued that Britain was not ready to fight a major war at the time. True enough, but as Bouverie points out, neither was Germany. When asked at his postwar trial whether German forces could have defeated a united front of Britain, France and Czechoslovakia in 1938, Gen. Alfred Jodl, chief of the German Army, replied, “It was out of the question.”

In his handling of the Sudetenland crisis, Chamberlain steamrollered his own government just as he had the Czechs. The prime minister did not inform his cabinet or seek its approval before making plans to negotiate personally with Hitler — an action that flouted the conventions of the British governmental system. Nor did he ever consult Parliament.

For his part, Hitler took advantage of the year after Munich to accelerate his country’s rearmament. Urged by members of his government to do the same, Chamberlain retorted, “But don’t you see, I have brought back peace.”

The British people, meanwhile, knew virtually nothing about the deplorable state of British rearmament or their government’s behind-the-scenes activities. Using tactics that have striking resonance today, Chamberlain and his men badgered the BBC and newspapers to follow the government’s lead on appeasement, restricted journalists’ access to government sources and claimed that critics of Chamberlain’s policies were disloyal to him and to Britain. Most of the news media did what the prime minister demanded. The BBC barred Winston Churchill and other opponents of appeasement from the airwaves, while newspaper editors refused to print articles on Britain’s unpreparedness and letters to the editor critical of the government’s concessions to Germany.

Bolstered by his Conservative Party’s huge majority in the House of Commons, Chamberlain also worked to crush dissent in Parliament. “To question his authority was treason: to deny his inspiration was almost blasphemy,” recalled Harold Macmillan, the future prime minister and one of a small band of Conservative M.P.s who, like Churchill, strongly opposed appeasement. The Conservative Party, in its efforts to silence Chamberlain’s parliamentary opponents, was “even stronger than the Nazi party machine,” a member of Chamberlain’s cabinet commented. “It may have a different aim, but it is similarly callous and ruthless.”

When Hitler invaded Poland in September 1939, Chamberlain had no choice but to declare war against Germany, but he remained committed to finding a peaceful way out. During the next seven months of “phony war,” there was little sense of national emergency in the country. Britain launched no military offensives against Germany, nor did it show much interest in mobilization.

In April 1940, however, Germany invaded Norway and Denmark, and Chamberlain’s campaign of secrecy and misinformation finally rebounded on him. Caught off guard by the surprise attacks, the British government scrambled to dispatch troops to aid the Norwegians. Barely two weeks later, Chamberlain made a stunning admission to Parliament and the nation: The badly armed and equipped British forces had been routed by the enemy and were being evacuated from Norway.

For more than a year, the British public had shown increasing signs of hostility toward Germany and disaffection with the prime minister’s inertia. When news broke of Britain’s humiliating defeat in Norway, that simmering discontent boiled over into fear and fury.

Capitalizing on the public mood, the Tory anti-appeasement rebels began an all-out effort to get rid of Chamberlain. On May 7 and 8, 1940, the House of Commons, in perhaps the most consequential debate in parliamentary history, engaged in a passionate examination of the prime minister’s conduct of the war. Before the debate, almost no one believed that Chamberlain could be ousted. Yet in the vote of confidence that followed, more than 80 M.P.s deserted him. Even though Chamberlain actually won the vote, such a large Tory defection was widely considered a resounding defeat.

On May 10, Chamberlain resigned and Winston Churchill became prime minister. That same day, Hitler launched his blitzkrieg of Western Europe. In the nick of time, the House of Commons had reasserted itself as a guardian of democracy and taken the first critical step toward victory in the war.

With their action, the M.P.s underscored the truth of a comment made earlier by one of them: “No government can change men’s souls. The souls of men change governments.”