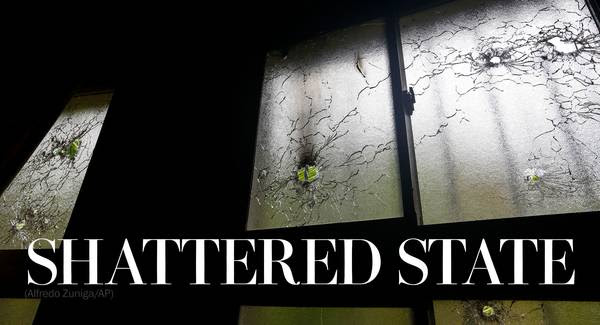 Forces loyal to Nicaraguan President Daniel Ortega deepened their crackdown on the country’s opposition on Wednesday, appearing to take full control of a rebel stronghold in the city of Masaya. A day earlier, heavily armed police and paramilitary fighters stormed the neighborhood of Monimbó, killing at least three people and taking 40 others into custody, according to a human rights group.

“In recent days the widespread attacks against the civilian population have intensified and grown in terms of scale and coordination, with aggressors carrying lethal weapons deployed to cities like Masaya that have come to symbolize the resistance to President Ortega’s merciless regime,” Erika Guevara-Rosas, the Americas director for Amnesty International, said in a Wednesday statement.

“This is a massacre in Monimbó,” high school teacher Álvaro Gómez said to the Wall Street Journal. “They’ve killed a bunch of youths who are resisting with homemade mortars, bombs and their anger.”

The violence there brings the death toll in Nicaragua to around 300 people — mostly civilians — since mid-April, when an unpopular pension-reform proposal sparked protests against the Ortega government. Those demonstrations escalated in the weeks that followed, with protesters setting up barricades in cities across the country.

They have been met with bloody and ruthless repression. A mass demonstration on May 30 in the capital, Managua, saw a dozen protesters gunned down by security forces. Over the weekend, pro-government militias cleared out protesting university students in the capital, driving them from their campus and forcing about 200 students to take shelter in a Catholic church.

My colleague Joshua Parlow was among them, pinned down by gunfire and trapped in the church’s compound for about 16 hours, where two of the wounded died from their injuries. The paramilitaries had blocked ambulance access, and it required the intervention of senior church officials and the U.S. State Department to break the impasse and allow the eventual evacuation of the students.

July 19 happens to mark the 39th anniversary of the victory of the Sandinistas, the left-wing revolutionary movement that overthrew the brutal, U.S.-backed dictatorship of Anastasio Somoza. Now Ortega, a 72-year-old former Marxist guerrilla, increasingly resembles the tyrant he and his comrades once toppled. Masaya was once a Sandinista hotbed; now it’s seen as a bastion of opposition.

“After returning to power in 2007, [Ortega] sidestepped the constitution to get himself reelected in 2011. He then completed his palace coup by assuming full control of all four branches of government, state institutions, the military, and police,” explained journalist Tim Rogers, a veteran Nicaragua hand. “He banned opposition parties, rewrote the constitution, and turned Nicaragua into his personal fiefdom, which he rules from inside the walls of his stolen compound, a concrete fortress he rarely leaves.”

Having long shed any pretense of Marxism-Leninism, Ortega maintained power by cultivating support among the clergy and the country’s business community. Until recently, he also could count on the largesse of Venezuela. “But then Venezuela cut its aid, and the government’s fiscal problems were exacerbated by corruption,” noted the Economist.

Now Nicaragua faces its own Venezuelan moment, with a regime violently clinging to power in the face of vehement popular unrest.“The demands of the people are clear: justice for those who have been killed, a return to democracy and the resignation of the ruling family,” Dánae Vílchez, a Managua-based journalist, wrote for The Post’s opinion section last month. “Ortega is calling for a ‘peaceful constitutional solution’ to the crisis, but he just wants to remain in power. His human rights violations have made him an illegitimate leader well outside of the Constitution. He needs to step down.”

Ortega, though, is showing no signs of quitting. He has tarred the opposition as “right-wing delinquents,” though many now opposed to his rule include former Sandinistas. His wife, Vice President Rosario Murillo, labeled Ortega’s opponents as “coup plotters, few in number, malignant, sinister, diabolical, satanic and terrorists.”

The duo, critics warn, is following the same tactics as leaders in Caracas. “Like Hugo Chávez, Ortega sought to remain in power indefinitely, but lately planned to hand the reins to his wife,” wrote Otto Reich, a former U.S. diplomat in Latin America. “In pursuing that goal, he worked from the Chávez playbook: manipulating electoral laws and eliminating checks and balances by controlling the national police; co-opting the Supreme Court and legislature; curtailing freedom of expression and repressing independent media; and harassing and hounding opposition forces and other critics.”

But while dissent may be suppressed at home, the Nicaraguan government is facing mounting criticism abroad. On Wednesday, the Organization of American States condemned the abuses carried out by Nicaraguan police and pro-government forces, calling on Ortega to adhere to a process of dialogue and eventual elections.

“Every additional victim of this violence and intimidation campaign further undermines Ortega’s legitimacy,” State Department spokeswoman Heather Nauert said this week. “Early free, fair and transparent elections are the best path back to democracy and respect for human rights in Nicaragua.”

“The appalling loss of life must stop — now,” said a spokesman for the U.N.’s human rights office. “The violence is all more horrific as armed elements loyal to the government are operating with the active or tacit support of the police and other state authorities.” U.N. Secretary General António Guterres, speaking from neighboring Costa Rica on Monday, decried the “use of force on the part of entities linked to the state.”

So far, Ortega seems unlikely to heed such warnings. But his regime’s brutalization of its own people risks repeating a bloody cycle many hoped Nicaragua had left in the past. “Venezuela shows that a regime which is heedless of the human cost can survive sustained national protests and international pressure,” the Economist observed. “Nicaraguans can only hope that their country will indeed prove to be different.”

“We weren’t ready for the massacres,” Valeska Valle, a 22-year-old student leader, said to Rogers last month. “We never thought the government was going to kill us. We never thought being a university student would be a crime in Nicaragua.”