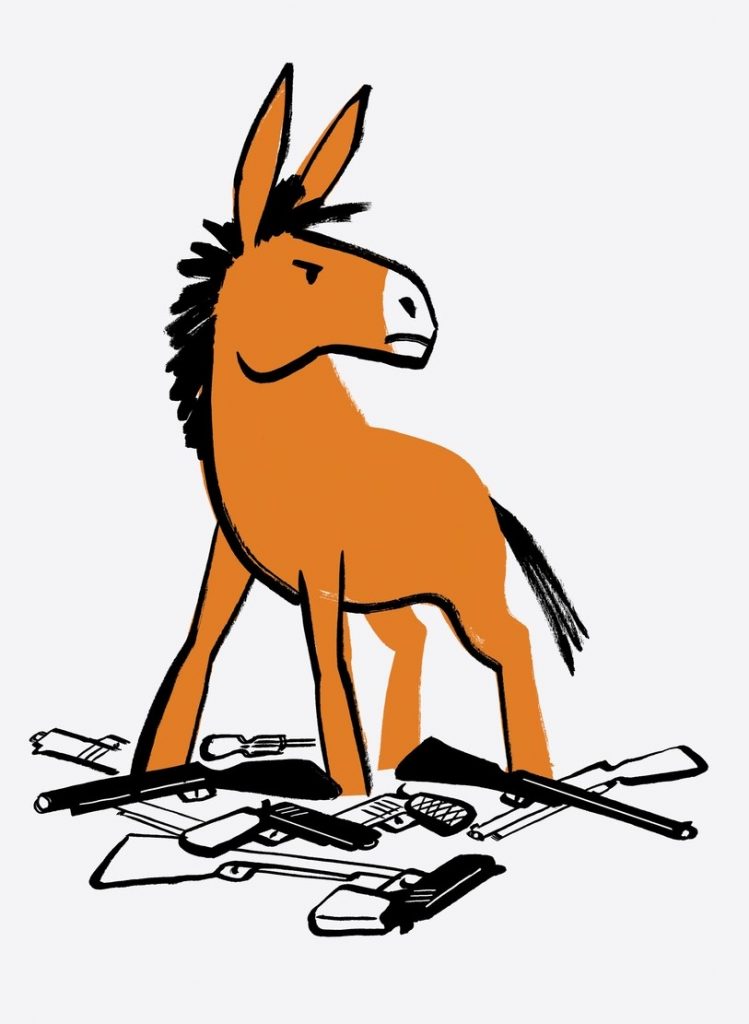 In September 12th, a little more than a month after the weekend that a shooter killed twenty-two people and wounded twenty-four more at a Walmart in El Paso, Texas, and a man killed nine people and wounded seventeen outside a bar in Dayton, Ohio, there was a moment of thrilling moral clarity during the Democratic Presidential debate. The former Texas congressman Beto O’Rourke, speaking about the kind of semi-automatic weapons used in the massacres, made it clear that he stood by his proposal not only to ban such weapons but to institute a mandatory buyback of them as well. As he put it, memorably, “Hell yes, we’re going to take your AR-15!”

Now O’Rourke is out of the race and the mandatory-buyback idea seems to have exited the stage with him. (Former Vice-President Joe Biden and Mayor Pete Buttigieg have endorsed voluntary buybacks; all the Democrats currently running support an assault-weapons ban and universal background checks.) With Michael Bloomberg, the former New York mayor, who founded Everytown for Gun Safety, now a candidate, there will be at least one Democrat making gun violence a central campaign issue. But all the Democrats seeking the Presidency would do well to channel some of the passion it provokes.

Public support for stricter gun laws is substantial, and growing. This isn’t surprising in a country as haunted as ours is by gun violence. As of December 6th, there have been more mass shootings in the United States in 2019—three hundred and ninety-one—than there have been days in the year, according to the Gun Violence Archive, a research organization that tracks these incidents. (The G.V.A. defines a mass shooting as one involving a minimum of four victims.) At the beginning of this school year, TuffyPacks, a company that makes “bullet-resistant” backpacks for schoolchildren, reported that its sales were up three hundred per cent. The C.E.O. told USA Today, “A lot of parents go, ‘This is a great product and a great idea’ and the other half go, ‘What a sad world that we have to think about this for our children.’ ” And, after decades of increasing longevity, Americans are dying at younger ages, a phenomenon in which the rising number of suicides—made possible, in many cases, by easy access to guns—plays a key role.

Despite the relentless efforts of special-interest groups such as the National Rifle Association to defeat virtually any gun regulation, many Americans will no longer accept a brittle and suspect interpretation of the Second Amendment at the expense of human lives. A Fox News poll taken in August, after the killings in El Paso and Dayton, showed that two-thirds of Americans favor a ban on assault rifles and semi-automatic weapons. In a survey of likely 2020 voters, conducted earlier in the summer by the polling group GQR, more than one in four said that their views on guns had changed during the past five years, and, of those, seventy-eight per cent said that they had shifted toward stronger laws curbing guns. Asked if they would support a voluntary-buyback program of the kind that Australia instituted in 1996, encouraging people to give up their assault-style weapons, forty-two per cent of the likely voters said that they “definitely” would, and twenty-nine per cent said they “probably” would. Other polls have shown overwhelming support for universal background checks and gun-owner licensing.

The movement for stricter gun legislation has been revitalized in recent years by new organizations and younger voices. For a Presidential candidate, supporting such measures need no longer entail the kind of political risk-taking, or solicitude for the gun lobby, that it might have even five years ago. Yes, some gun owners will go to defiant extremes—in Virginia, for instance, dozens of rural counties have declared themselves “Second Amendment sanctuaries,” following the election of a Democratic-controlled state legislature, which will assume office in January and is expected to pass gun restrictions. But such stunts aren’t likely to win many people over: the measures that the legislature will probably take—such as restoring a law that limited individuals to one handgun purchase per month—have broad, bipartisan support.

Nor do the courts pose an insurmountable obstacle to sensible gun laws. It’s true that the 2008 Supreme Court ruling in District of Columbia v. Heller established an individual’s right to keep a gun in the home, outside the context of the “well-ordered militia” stipulated in the Second Amendment. It was an extraordinary reinterpretation of the Court’s previous jurisprudence on guns. In 1991, the conservative former Supreme Court Chief Justice Warren Burger, referring to the expansionist view of the Second Amendment that Heller later enshrined, called it “one of the greatest pieces of fraud, I repeat the word fraud, on the American public by special-interest groups that I have ever seen in my lifetime.” The retired Justice John Paul Stevens published a book last summer, shortly before his death, in which he called Heller, a 5–4 ruling whose majority opinion was written by Antonin Scalia, “unquestionably the most clearly incorrect decision that the Supreme Court announced during my tenure on the bench.”

But even Heller contained important caveats and, partly because of them, in the years since, state courts have upheld the vast majority of gun-safety laws they’ve been asked to rule on. (Last week, for the first time in nearly a decade, the Supreme Court heard oral arguments in a Second Amendment case, New York State Rifle and Pistol Association v. City of New York, New York. But, because the city had repealed the law before the case came before the Court—lifting the restrictions that the gun-owner plaintiffs in the case objected to—it may be moot, and therefore unlikely to yield a substantive ruling.) In Heller, the Court noted examples of the kinds of constraints that would be “presumptively lawful”—“laws imposing conditions and qualifications on the commercial sale of arms,” for example, or those banning guns in certain public places. “Like most rights, the right secured by the Second Amendment is not unlimited,” Scalia wrote. It is not “a right to keep and carry any weapon whatsoever in any manner whatsoever and for whatever purpose.”

Those are words that gun lobbyists often choose to forget, though they were written by a man who must be a hero to them. The Democrats still running for President shouldn’t let them forget. Stronger gun laws are popular and necessary—and they’re also constitutional. ♦