“Field of Dreams” will become a big-league reality on Aug. 13, 2020, when the beloved 1989 baseball movie will spring to life in the Iowa cornfields. As announced Thursday, the White Sox and Yankees will stage the first-ever Major League game in the Hawkeye State, in a temporary 8,000-seat ballpark constructed in the corn on the Dyersville farm site where the classic film was shot.

MLB at Field of Dreams presented by GEICO will be nationally broadcast on FOX at 7 p.m. ET. and, following the precedent of the now-annual Little League Classic in Williamsport, Pa., and this year’s MLB in Omaha at the NCAA’s College World Series site, is the latest example of the game bringing itself to iconic American baseball venues outside of typical big league jurisdiction.

“As a sport that is proud of its history linking generations, Major League Baseball is excited to bring a regular season game to the site of Field of Dreams,” Commissioner Rob Manfred said. “We look forward to celebrating the movie’s enduring message of how baseball brings people together at this special cornfield in Iowa.”

Though “Shoeless” Joe Jackson will not, in fact, come to the game (unless, of course, the movie’s association with the spirit life really does come true), the White Sox franchise so central to his complicated legacy and its relatively close location to Iowa will naturally be involved. Played on a Thursday, the game will be considered a White Sox home date, followed by a Friday off-day before the two clubs resume their three-game series at Guaranteed Rate Field in Chicago on that Saturday.

Construction on the small ballpark that will house the game will begin next Tuesday, exactly one year from the date of the game and a little more than 30 years from the release of the movie starring Kevin Costner and based on W.P. Kinsella’s Shoeless Joe novel.

A project of this nature for a single MLB game is not without precedent. In 2016, a 12,500-seat facility was built on an unused golf course on the grounds of Fort Bragg for a game between the Marlins and Braves that celebrated the military. But the Dyersville facility will not be the smallest-capacity stadium to house an MLB game. That honor belongs to BB&T Ballpark at Historic Bowman Field, home of the Little League Classic, which has a capacity of 2,366 and will host the 2019 Little League Classic between the Cubs and Pirates on Sunday, Aug. 18.

The design of the ballpark in Dyersville, including the shape of the outfield and the bullpens beyond the center-field fence, will pay homage to Comiskey Park, which was home of the White Sox from 1910-90. The right-field wall will include windows to show the cornfields beyond the ballpark, which will overlook the movie set.

Fans attending the game will walk along a pathway through a cornfield, before the corn clears and reveals the sparkling diamond, equal parts heaven and Iowa, the birthplace of Hall of Famers Bob Feller, Cap Anson, Dave Bancroft, Fred Clarke, Red Faber and Dazzy Vance.

Movie lovers and baseball fanatics have flocked to the Lansing Family Farm site, which has since been purchased by Denise Stillman and a group of investors, for decades. In 2016, baseball dignitaries, including Manfred, visited for the unveiling of a traveling National Baseball Hall of Fame and Museum exhibit.

But this game will take the relationship to a level long-discussed but previously existent only, yes, in dreams.

If you build it …@Yankees. @whitesox. THE Field of Dreams. 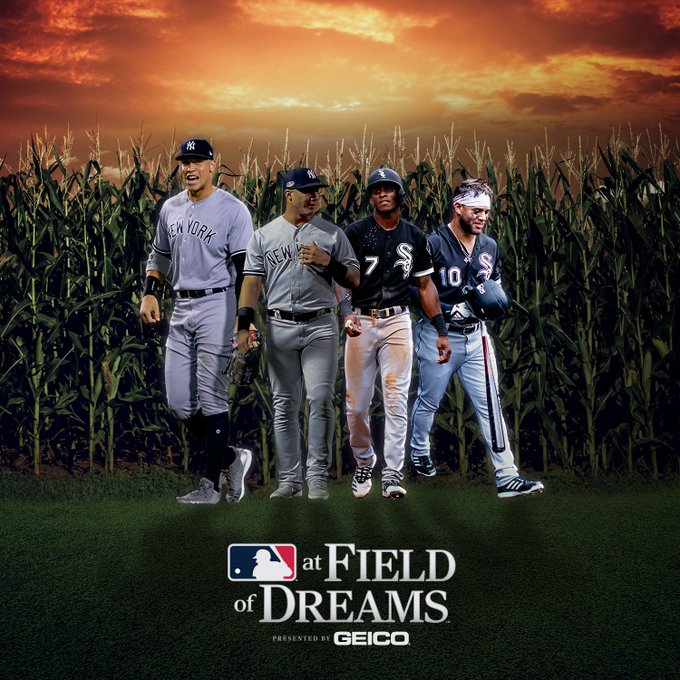 “‘Field of Dreams’ captures the uniqueness of Iowans’ can-do attitude, and there’s no better place to host our state’s very first Major League game than this legendary baseball field in Dyersville,” Iowa Gov. Kim Reynolds said. “As the famous movie quote goes, ‘Is this heaven?’ ‘No, it’s Iowa.’ Iowa’s truly a land of opportunity, where you can work hard, dream big and anything can happen. I look forward to this historic event in 2020.”

While the participation of the White Sox is an obvious fit, the Yankees, fresh off this year’s London Series against the Red Sox, will be taking part in another non-traditional road date.

“It’s a distinct honor for us to showcase our great game in such an iconic and intimate setting while promoting the movie’s legacy,” Yankees managing general partner Hal Steinbrenner said. “I fully expect that this experience will exemplify why baseball remains a cherished American pastime.”

Information on limited ticket availability will be announced by MLB in the months ahead.

Anthony Castrovince has been a reporter for MLB.com since 2004. Read his columns and follow him on Twitter at @Castrovince.

The Race Card in America