Stop all the clocks, mute all the smartphones. The game has been momentarily halted.

With President Trump’s announcement that he and his wife have tested positive for the novel coronavirus, the presidential campaign is temporarily paused, and questions of what comes next have kicked all other concerns to the sidelines. The possible implications across a host of scenarios are mind-boggling.

Within hours of the news, all sorts of probabilities had been explored, analyzed and sifted for notes of clarity. If the president should become seriously ill — or, God forbid, die — then the Republican National Committee has the option of choosing a replacement candidate. Should Trump transfer power to the vice president for the duration of his recovery (unlikely), what happens if Mike Pence gets sick?

This is not a celebratory moment. Whenever a president’s vitals are being monitored, there is always worry that markets could waver or plunge. (No sign of that yet.) People may believe that our national security could be at greater risk. (More likely, the opposite is true.) Ramifications for the election are too complex to calculate. It’s a terrible situation on nearly every front — but one.

Could this be it? By “it,” I mean the thing that finally forces Trump to become human? In the event that Trump experiences the full brunt of the disease that has killed 200,000 Americans, might he emerge from the passage transformed? Illness can be a fast track to humility, gratitude and grace.

We’ve asked ourselves this question dozens of times since Trump took office. Surely, he doesn’t mean what he says, we told ourselves. He’ll correct himself, apologize to those he’s insulted, explain that he misspoke. We know, however, that Trump tends to double down when challenged, views an apology as weakness and has no knack for empathy. But suffering often changes people, and miracles do happen.

It should go without saying that we wish the president and Melania a speedy recovery. Their son, Barron, has tested negative, but others surrounding the president are a different story. In recent weeks and days, the White House has seemed like the viral equivalent of a fly-catcher, with one after another staffer testing positive — most recently senior adviser Hope Hicks, who traveled with the president on Tuesday and Wednesday and tested positive on Thursday. Despite knowing her case, Trump still traveled to a fundraiser at his golf club in New Jersey that same day.

Trump has earned understandable criticism and contempt for his casual attitude toward the virus and the wearing of masks. His words and actions — such as holding rallies where his supporters follow him in not wearing masks — have been a disservice to the American people, as well as, we know now, to his staff, family and his own health. From Bob Woodward’s new book, “Rage,” we know that Trump was aware of the dangers of the disease as far back as Feb. 7 and that he purposely downplayed it in public.

He kept at it right up through the first (and possibly last) “debate.” Trump mocked former vice president Joe Biden’s mask-wearing habit, quipping: “He could be speaking 200 feet away from them, and he shows up with the biggest mask I’ve ever seen.” Though Trump’s family entered the debate hall wearing masks, they removed them upon sitting down. When a Cleveland Clinic representative presented them with masks to wear during the session, they declined.

May Trump mock no more. And, while we’re praying, may the dregs of Twitter and other social media engaged in schadenfreude, or even hoping for the president’s demise, take a good look in the mirror. Hate leaves tracks.

That Trump has contributed to creating these conditions is no reason to try to outdo him. Trump’s diagnosis provides a vehicle for diagnosing ourselves. To the question what kind of people do we want to be, the answer should be a resounding “Not that.”

The best outcome, of course, would be that Trump recovers, humbled and newly committed to combating the coronavirus and setting an example by wearing a mask.

Such a man might not win many hearts or the election, but he’d be the best version of himself he’s ever been — and a much-needed tonic for a sick nation. 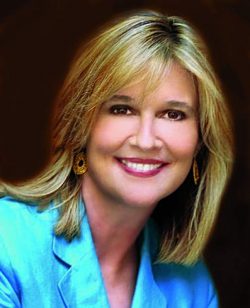 Kathleen Parker writes a twice-weekly column on politics and culture. In 2010, she received the Pulitzer Prize for Commentary for “her perceptive, often witty columns on an array of political and moral issues, gracefully sharing the experiences and values that lead her to unpredictable conclusions.” A Florida native, Parker started her column in 1987 when she was a staff writer for the Orlando Sentinel. She joined the Washington Post Writers Group in 2006. She is the author of “Save the Males: Why Men Matter, Why Women Should Care” (2008).