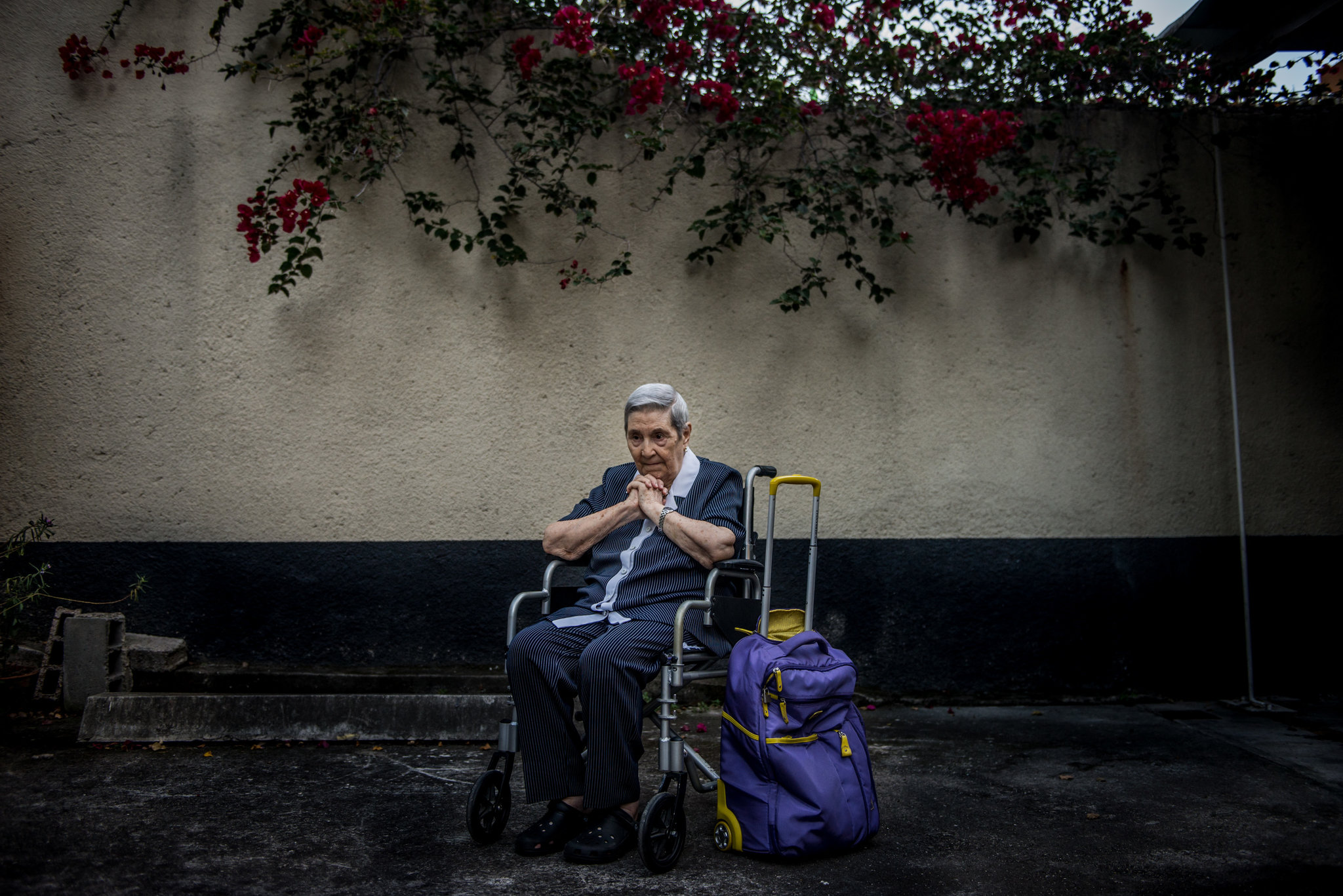 Maria Abad Cruz, 90, outside her home in Caracas. She plans to move to Spain, the country of her birth, leaving behind the Venezuela she loves. Credit Meridith Kohut for The New York Times

CARACAS, Venezuela — María Abad Cruz, 90, sits on the cusp of her fourth migration, and it may be the hardest one.

Within a few months, if her children’s plan works out, she will move to Spain, the country of her birth, leaving behind Venezuela, the country where she has lived most of her long life and has loved like no other, even if that love these days has been painfully unrequited.

Venezuela is where she met her husband, raised three children and suffered a sorrow so great that she fled to Spain, only to return some years later because Venezuela, after all, was the place she felt most at home.

But amid the worsening economic and political crises, life has become too difficult and, with reluctance, she is coming to the realization that she might be better off leaving.

“Venezuela, for me, is the greatest there is,” Ms. Abad said. “But at the moment it’s impossible.”

In the past two decades, hundreds of thousands of Venezuelans — by some estimates as many as two million — have migrated abroad, with the tendency accelerating in the past several years during the increasingly authoritarian rule of President Nicolás Maduro.

The vast majority have been younger Venezuelans in the prime of their working lives. Yet the huge flow of émigrés has also included a smaller number of older Venezuelans, driven abroad for many of the same reasons, including scarcities of food and medicine, soaring poverty and crime.

Many are following the steps of their children, nieces, nephews and grandchildren who have been imploring them to leave, too.

But for older migrants, the decision to leave is fraught with unique anxieties and uncertainties: about access to health care in destination countries, about the loss of social networks and the comforts developed over a lifetime, about starting from scratch in a brand-new place just when they expected to be enjoying retirement.

Mr. Reyes, who spent his career running small businesses, has glaucoma. With medicine increasingly scarce in Venezuela, it has become a near-daily ordeal for him to visit as many as seven pharmacies in an often fruitless search for the eye drops he needs.

Ms. Reyes, a retired employee of Venezuela’s Education Ministry, was told by her doctor that the cancerous lesion on her forehead was probably the result of all the hours she was forced to stand in lines in the sun waiting to buy food or withdraw money from the bank.

As inflation has soared, the value of the couple’s pension has diminished. The last three-milliliter bottle of drops Mr. Reyes bought cost him more than half his monthly pension.

“We want to live in tranquillity,” Ms. Reyes said in the couple’s homey four-bedroom house in the rolling hills of Los Teques, a suburban area south of the capital where they have lived since they were married 50 years ago. “The anguish is too strong for us.”

With the encouragement of a son who recently migrated to Chile and a niece living in Ecuador, they are planning to leave by early next year, bound for Quito. They have enough savings to pay for their flight and plan to sell one of two houses they own to enable them to open a small business wherever they settle. Ms. Reyes envisions starting either a restaurant or a copy shop.

They still don’t know whether or how quickly they will be able to get legal permission to work. But the biggest challenge, they say, is leaving behind their tight-knit family, many of whom live within walking distance or a short drive of their home, including Mr. Reyes’s 100-year-old mother.

“All our life is here, we have our roots, our house, we’ve lived nicely, we have our family,” Ms. Reyes paused. “But a bad government.”

Older Venezuelans who have recently migrated say that arguably the biggest hardship is coming to terms with the challenges of starting anew in their sunset years.

“Very hard, very intense,” said Fernando Galíndez, 75, who left Venezuela with his wife and a son several years ago and resettled in South Florida.

In Venezuela, Mr. Galíndez ran a successful landscape design company; his wife was a marketing director in the Venezuela office of a multinational firm. But the security situation got so intense that they decided to leave. They sold everything they could and settled in Doral, Fla.

In the time it took to get work permits, they ran though their savings. But Mr. Galíndez eventually found work as an adjunct science professor at Miami Dade College and his wife was hired as an administrator in a company.

To prospective migrants, Mr. Galíndez offered this advice: “You have to understand that to be an immigrant means starting from zero.”

The current rush for the borders is a reversal of a generations-long trend. For decades, Venezuela was a destination for economic migrants and political refugees seeking security and a new life in a country that was once one of the wealthiest in Latin America. Now many older Venezuelans, in deciding where to flee, are reconnecting with those foreign roots, some nearly forgotten.

María Mata, 67, a retired government social worker, plans to migrate to Germany, the birthplace of her great-grandparents.

Two of her three sons have already moved abroad, one to Ireland and the other to Spain. Now Ms. Mata and her third son, Eduardo Delgado, 39, are planning to move together to Munich. Both have obtained German citizenship based on their family lineage.

“I feel like a foreigner in Venezuela now; it’s not the Venezuela I know,” Ms. Mata said in an interview at a bakery in Caracas near her home. “It’s difficult to stay in a country when the identity is broken. It’s very, very sad.”

Ms. Mata said she hopes to find employment in Germany, anything that brings in an income and allows her to save a little. She has heard there is work in caring for the elderly and infirm.

This was not what she had in mind when, as a younger woman, she looked toward retirement in Venezuela.

“You work toward your golden years, you save,” she said, “and then everything goes toward survival.”

There was no alternative, she said, but to leave: “To stay is to die.”

In October, Carmen María González de Álvarez reversed her parents’ journey from Europe. They were born in Las Palmas, the capital of Gran Canaria in the Canary Islands of Spain, and in 1953 migrated to Venezuela, where Ms. González was born.

On the return to her familial homeland, she was accompanied by her husband, Nelson Álvarez, 64, and their son, Nelson Luis, 30.

The family was compelled to leave everything it had built in Venezuela because caring for Nelson Luis, who has catastrophic epilepsy, had become too trying in Venezuela’s collapsed health care system. They had run through their savings to pay for their son’s costly array of medicines.

Furthermore, Mr. Álvarez’s work as a real estate agent had dried up: He went a year without selling a property. “We were bleeding out,” he said. “If we waited six months, we’d be down to nothing.”

Ms. González, 58, and her son arrived with Spanish citizenship, which offered key advantages, like access to social services. But even so, it has been a rough transition for the family.

“An extremely painful and difficult decision for any human being,” Mr. Álvarez said. “Imagine how it is for me, at 64 years old. Who’s going to give me work?”

The family also had to tear themselves from the close-knit cocoon of their extended family and their community in the Caracas municipality of El Hatillo, where Mr. Álvarez was a civic leader.

“Imagine: As soon as I left the house, people would greet me in the street,” he said. “Here, I know nobody.”

As for the 90-year-old Ms. Abad, what she will miss about Venezuela, she said, are things already gone; she is practiced in loss.

“There isn’t food, there isn’t medicine, there isn’t anything,” she said in a recent interview at her apartment building. She was sitting in a wheelchair.

Born in Spain, she migrated to Venezuela in 1952 when she was 25, fell in love with the country and with a Venezuelan civil engineer who soon became her husband, and had three children. Following her husband’s death in 1963, she returned to Spain with their children and lived there for two decades, though she pined for Venezuela.

“I’ve always been Venezuelan,” she said.

She returned in 1985 and has lived in Caracas ever since.

She wipes away tears from the corners of her eyes as she remembers what Venezuela used to be, recalling an era in which people dressed up before they visited Bolívar Plaza, the landmark square in downtown Caracas, an area now plagued by crime.

“Today they kill there,” she said. “Everything has changed.”

Her last visit to the site did not go well: She encountered a place very different from the one she remembered and did not like it at all. “I told my daughter, ‘Get me out of here,’” she recalled.

Still, even though she called the country’s current state “deplorable,” she has not fully given herself over to the idea of leaving. Her children have been pressing, but she remains hesitant.

“I don’t know if we are going to Spain, but we are thinking about it because we can’t live here,” she said.

Ms. Abad takes 21 different medicines and has round-the-clock nursing care, all paid for by her children, one of whom lives abroad. But this situation is unsustainable, the family explained, making Spain and its health care system a better alternative.

Ms. Abad said she understood the wisdom of this. Still, the thought of yet another migration clearly pains her. Then again, so does the thought of further weathering Venezuela’s downward spiral.

Asked if she would leave Venezuela with the hope that she could one day return, she gave the question some more thought. “I don’t think so,” she continued. “But I’ll keep it in my heart for the rest of my life.”