About a year ago, Chinese President Xi Jinping fired a warning shot across the straits. Taiwan, he said, “must and will be” reunited with China. Xi addressed the island’s democratically elected leadership, insisting that “independence will only bring hardship” and that unification with the mainland was “an inevitable requirement for the great rejuvenation of the Chinese people.”

This weekend, Taiwanese voters sent Xi their most emphatic response yet by delivering President Tsai Ing-wen a landslide victory in the country’s presidential election. Tsai, who represents the independence-leaning Democratic Progressive Party, won 57 percent of the vote in a three-way race that had a high turnout of 74 percent. It was the biggest election victory since Taiwan held its first free and fair presidential election in 1996. 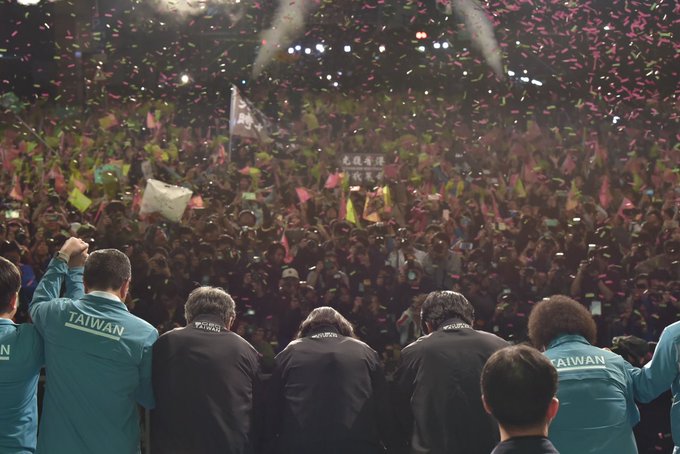 But the events of the past year have underscored both the fragility of the Hong Kong model and the unflinching authoritarianism of Xi’s rule and fueled a backlash against Tsai’s main rivals, the China-friendly Kuomintang, or KMT. “The results of this election carry an added significance,” Tsai told reporters over the weekend. “They have shown that when our sovereignty is threatened, the Taiwanese people will shout our determination even more loudly back.”
It’s unlikely Beijing will heed that message. “This temporary counter-current is just a bubble under the tide of the times,” official state-run Xinhua News Agency said in reaction to Taiwan’s election, branding Tsai’s decisive win a “fluke” while insisting that “reunification cannot be stopped by any force or anyone.”
But Tsai and her allies don’t see themselves as victims of history. Taiwan “has existed in a kind of limbo ever since the Communists took control of China and the nationalists from the Kuomintang fled to the island, 100 miles off China’s southeast coast, in 1949,” explained my colleague Anna Fifield. “But in reality, it has become a dynamic and pluralistic society, boasting the world’s first transgender cabinet minister and last year becoming the first in the region to legalize same-sex marriage, with its own sense of national identity.”
Relations between China and Taiwan have deteriorated since 2015, when Xi invited representatives of the KMT to a parade commemorating the Japanese surrender in World War II. Beijing downgraded ties with Taipei after Tsai was elected in 2016 and has attempted to use various coercive measures to put pressure on her government, thinning the flow of mainland tourists and working to bar Taiwan from various international institutions, including the World Health Organization and the recent round of U.N.-backed climate talks.
At the same time, attitudes are hardening in Taiwan, with many people turning their back on the “1992 consensus” — an understanding reached almost three decades ago between the then-ruling KMT and Beijing that agreed on the one-China principle, but left room for differing interpretations of what that meant in Taiwan and the mainland. In various moments since, this vague commitment to unity provided the basis for warming ties between the two sides.
But that unity is little on show now. Tsai, for her part, has been a vocal supporter of Hong Kong’s protests and has allowed dozens of activists from the former British colony to take at least temporary sanctuary in Taiwan. “We reject the ‘one country, two systems’ proposed by Xi Jinping,” she told reporters Saturday night. “We value the lifestyle of democracy, and we defend our sovereignty.”

The U.S. congratulates Dr. Tsai Ing-wen on her re-election in #Taiwan‘s presidential election. Taiwan once again demonstrates the strength of its robust democratic system. Thank you President Tsai for your leadership in developing a strong U.S. partnership.

Xi, meanwhile, refuses to rule out the possibility of using military might to bring the two countries together, an extreme escalation that could trigger armed conflict with the United States. His hard-line stance is part of a broader nationalist pose: China’s showdown over trade with the Trump administration, coupled with the glare of global attention on Hong Kong’s protesters, gives Xi little room for conciliation, argued Pan Chao-min, a professor at Tunghai University’s Graduate Institute of Political Science in Taiwan.
“We can foresee that China will strengthen efforts to poach Taiwan’s remaining diplomatic allies and prevent the island from participating in international organizations and events,” Pan told Asia Nikkei Review. “Beijing will also offer more incentives to hollow out Taiwanese industry and talent.”
“I doubt that Beijing will reflect on the meaning of President Tsai’s victory, but will double down on the coercive policies it deployed during her first term,” Richard Bush, a senior fellow at the Brookings Institution, told Bloomberg News. “Beijing sees the Trump administration, and not President Tsai, as the more dangerous variable here. It will push back harder against U.S. initiatives to help Taiwan.”
Though exulting in victory, Tsai reiterated her “commitment to peaceful, stable cross-strait relations” with Beijing. But the various external and domestic pressures underlying Xi’s rule — not least the death of any prospect of unification, at least in the near future — suggest that tensions may soon flare.
“There is no doubt Tsai’s landslide is a victory for the forces of liberal democracy,” wrote Jamil Anderlini of the Financial Times. “But it has probably also made the region just a bit more dangerous.”
Etiquetas
Elecciones Taiwan Relaciones China-Taiwan Tsai Ing-wen
Ishaan Taroor - The Washington Postenero 14, 2020
36
Compartir
Facebook Twitter LinkedIn Pinterest WhatsApp Telegram Imprimir