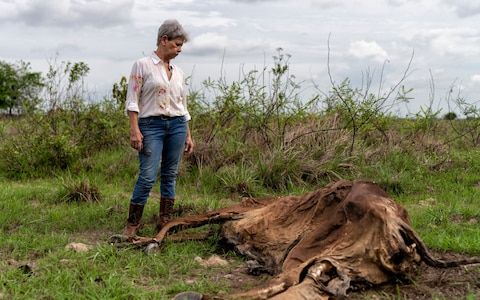 Marisela Febres stands over a dead cow on a stolen farm she was able to recover. CREDIT: VICTOR RAISON

When they took Marisela Febres’ first farm, it was painful. The 3,500 hectare estate in Venezuela’s agricultural heartland had, like all their land, been in the family for over 100 years; it was a productive, lovingly-tended finca. Expropriated in 2008 by the government, it is now a barren wasteland.

When they came for her second farm, it was devastating.

The 749 hectares of La Primavera produced three tonnes of maize, 9,000 kilos of yucca, and supported dozens of locals in Barinas state. Since it was invaded in 2016 it, too, is now in ruins.

Last year Ms Febres’ third farm was also seized by pro-government thugs, but after an eight month fight she managed to convince police to oust them. Standing in the grounds she surveys the wreckage; dead cows, torched fields and tractors with their parts ripped out.

This tropical country of 30 million people, around the size of Nigeria, once had a flourishing food production industry that was the envy of the Americas. Almost everything grew here: maize and yucca, potatoes and sugar, vegetables and fruits. Coffee, cacao and rice were exported to regional neighbours; meat was abundant.

Up until 2007, Venezuela produced 70 per cent of what it consumed. But in recent years over five million hectares of agricultural land have been stolen or expropriated, according to studies.

“This year we’re not even going to produce 10 per cent of what we need. And those farmers who continue are heroes,” says Andres Eloy Camejo, a rancher and an opposition deputy representing Barinas.

“The petro boom hid the crisis for a while. But now it’s on full display.”

It is not just land that now belongs to the state. Farmers have been crippled by the government taking over control of all seeds, fertiliser and imports of machinery.

Powerful and successful agricultural companies were nationalised; now, farmers rely on the government to provide seeds, which often arrive late, or the wrong type, or insufficient quantities.

“They’ve dismantled the supply chain,” says Mr Camejo. And it’s not just large landowners like him that are affected. 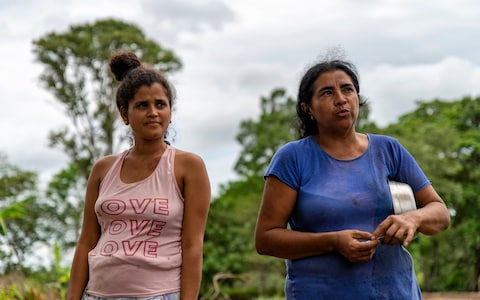 Nori Rivas, 52, ekes out a living on five hectares, planting whatever seeds the government delivers – she has no say over it – and tending to her 60 chickens, pigs, and ducks.

“It’s really, really hard,” she says. “Before we had good seeds, and lots of fertiliser. Now we don’t know what’s going on. We can’t get credit to invest in our farm, or repair the machiner. The prices of all the supplies are rising not just with the day but by the hour.”

Those farmers who keep hold of their property face a further threat from thieves and cattle-raiders. Two or three of Ms Febres’ 600 remaining cattle are poached per week, with the meat going to the black market or, she thinks, to feed starving locals.

The struggle in the fields spreads across the country.

Meanwhile prices keep rising. The International Monetary Fund expects the inflation rate to reach 10 million per cent in 2019, which would be one of the worst cases of hyperinflation in modern history.

This has exacerbated the country’s faltering ability to import food. As Venezuela funds most of its agricultural imports through oil sales, the collapse in the crude price had already eaten away at the range and availability of produce.

Imports of corn have fallen 43pc since 2013; until the government stopped publishing farming data a few years ago, figures showed a 73pc drop in food imports per person per year since 2012.

Partly as a result, almost half the Venezuelan population now rely on boxes of rice, pasta and oil imported from Mexico and distributed by the Local Committees for Supply and Production (CLAP). These CLAP boxes often arrive half-empty. Under what is known as the ‘Maduro diet’, eight in ten households do not have enough to eat.

Mrs Febres knows the situation is desperate. Yesterday UN agencies reported that four million Venezuelans had fled the country since 2015.

“I strongly believe, in the bottom of my heart, that if you are in control of land you have to produce on it – you have to grow food or raise animals, and benefit the people,” she said. “Now we have a group of absolutely shameless people who dedicate themselves to invading and destroying farms, ruining the agricultural sector.

“This regime has to go, and not just Maduro. They’re wiping out production. And killing the people.”