Sen. Bernie Sanders (I-Vt.), on the strength of his performances in Iowa and New Hampshire, has surged nationally and now holds a sizable lead over all of his rivals for the Democratic presidential nomination, according to a Washington Post-ABC News poll. 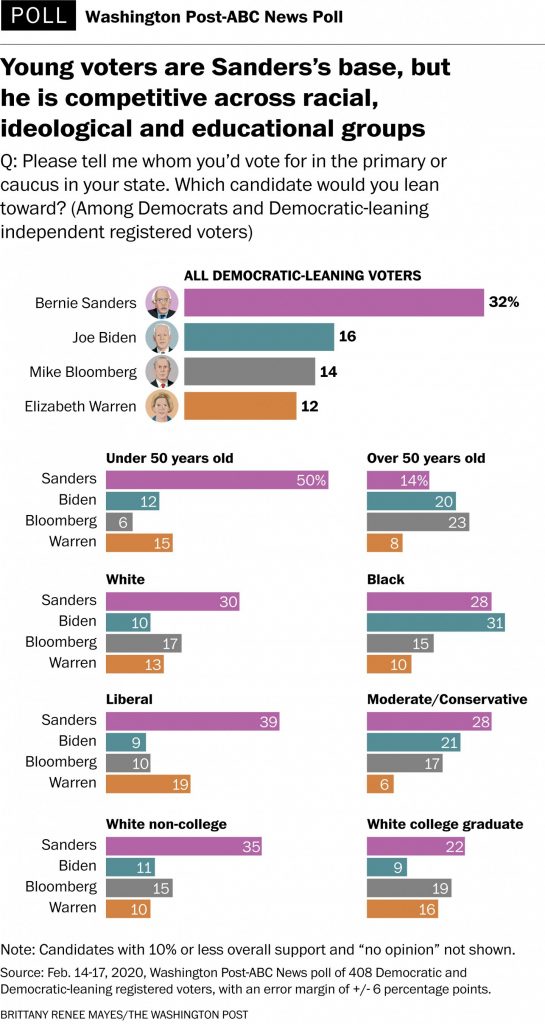 Former vice president Joe Biden, who led Sanders in a Post-ABC national poll in January, has seen a sharp drop in his support after finishing fourth in the Iowa caucuses and fifth in the New Hampshire primary. Biden is now in a battle for second place with former New York mayor Mike Bloomberg and Sen. Elizabeth Warren (D-Mass.).

Former South Bend, Ind., mayor Pete Buttigieg, who won the state-delegate-count battle in the Iowa caucuses and came a close second to Sanders in New Hampshire, is in single digits nationally, roughly even with Sen. Amy Klobuchar (D-Minn.), whose surprise third-place finish in New Hampshire further scrambled the Democratic contest.

The poll underscores how quickly support for candidates can change in national polls on the strength of results from individual primaries and caucuses. The findings come on the day of a Democratic debate in Las Vegas that will include Bloomberg on the stage for the first time and represents a high-stakes gamble for all the candidates.

The poll also comes just days ahead of the third contest on the calendar, Saturday’s Nevada caucuses, with the South Carolina primary to follow on Feb. 29. After South Carolina, the campaign goes national, with 14 states holding contests on March 3, Super Tuesday, and crucial primaries in a variety of big states later in the month.

The Post-ABC poll shows Sanders, who got more votes in Iowa than any other candidate ahead of his narrow win in New Hampshire, with the support of 32 percent of Democrats and Democratic-leaning registered voters. That is an increase of nine percentage points since January. He holds double-digit leads among both women and men, as well as among those who say they are certain to vote in their state’s primary or caucuses.

Biden, who was at 32 percent support in January, has fallen to 16 percent in the new survey. He faces significant hurdles as he attempts to mount a comeback, with his hopes pinned on success in Nevada and especially South Carolina, where he had long been the favorite of African American voters who make up a hefty majority of the Democratic electorate there.

Bloomberg, who is skipping the first four states but has poured hundreds of millions of dollars into television ads in states with primaries in March, stands at 14 percent, up from 8 percent in January. He has only recently begun to receive significant criticism from the other candidates, however.

Warren saw no change in her national support, remaining at 12 percent. Buttigieg, despite his strong performances in Iowa and New Hampshire, runs fifth nationally at 8 percent, ticking up from 5 percent a month ago. Klobuchar stands at 7 percent in the new national poll, up from just 3 percent. Buttigieg and Klobuchar face a similar challenge, which is to appeal to a broader coalition of voters in the coming two early-state contests.

Biden’s poor finishes in Iowa and New Hampshire appear to have robbed him of his image as the most electable against President Trump in November — the chief attribute he has used to define his campaign.

By a wide margin, 58 percent to 38 percent, Democrats say they would rather nominate a candidate who can defeat Trump than one who agrees with them on major issues.

Electability is a subjective judgment, however, and the former vice president is paying the price for his failure to draw more significant backing from voters in the first two states. A month ago, 38 percent of Democratic-leaning adults cited Biden when asked which candidate has the best chance to defeat Trump, making him their top choice in that regard. Today that has dropped by half, to 19 percent.

In the new poll, Sanders is seen as the most electable, cited by 30 percent of Democratic leaners as best situated to beat Trump. Bloomberg is cited by 18 percent on this question, with no other Democrat close to double digits.

In the past month, Biden has lost support among three key constituency groups: African Americans, older voters and whites without college degrees, previously the bulwarks of his campaign. In a Post-Ipsos poll this year, Biden was backed by 48 percent of African American voters. Today that has fallen to 31 percent. Compared with January’s Post-ABC poll, his support has been cut nearly in half among voters over age 50 and stands at 20 percent; among non-college whites, support for Biden plummeted from 33 percent to 11 percent.

Sanders has seen a big jump in support among voters under age 50 and is now backed by 50 percent of that group, up from 34 percent in January. He holds a 3-to-1 lead over his rivals among these voters. Sanders also has more than doubled his support among black voters and has gained among whites without college degrees.

Bloomberg’s growth was fueled by more support among older voters and among white voters with college degrees. Buttigieg, Warren and Klobuchar saw no significant shifts in their coalitions.

In the Post-ABC poll, 62 percent of Democratic-leaning adults say Sanders is “about right” ideologically, almost 20 points higher than the share who said the same in the New Hampshire exit poll. Comfort with Sanders’s positions is roughly on par with Biden’s (63 percent), Warren’s (63 percent) and Buttigieg’s (60 percent).

In a measure of how Democrats see Sanders as a candidate against Trump, 72 percent say they believe he would defeat the president. Among Democrats, 69 percent think Bloomberg would win against Trump, and 68 percent say that of Biden. Perceptions of Warren and Buttigieg as general-election candidates are also positive but not as strong as the others. Democrats are roughly split on whether Klobuchar or Trump would prevail in a hypothetical matchup.

If he were to become the nominee, about half of all Americans say it makes no difference in their vote that Sanders is a socialist, including about 7 in 10 Democrats. But nearly 4 in 10 adults say that fact makes them more likely to oppose him, including 37 percent of independents and 79 percent of Republicans. Just under 1 in 10 adults say it makes them more likely to support him. Views of Sanders’s identification as a democratic socialist are slightly less negative.

The president’s approval rating stands at 43 percent, with 53 percent disapproving, showing no real change in the past month. His approval on handling the economy remains net positive, with 52 percent saying they approve of the job he’s doing and 40 percent disapproving. Last month, 56 percent gave him a positive rating.

Looking ahead to November, the poll tested six Democrats in hypothetical general-election matchups. Biden, Sanders and Bloomberg fare best, edging Trump by five to seven points, with Trump receiving 45 percent support against each. Buttigieg, Klobuchar and Warren are within the margin of error of Trump in these measures. Across all matchups, Trump is in a similar position as January, but better off than last October.

The Post-ABC poll was conducted by telephone from Feb. 14-17 among a random national sample of 1,066 adults, 65 percent of whom were reached on cellphones and 35 percent on landlines. Overall results have a margin of sampling error of plus or minus 3.5 percentage points; the error margin is four points among the sample of 913 registered voters and six points among the sample of 408 Democrats and Democratic-leaning registered voters.

Emily Guskin contributed to this report.