It was the split-finger fastball that helped Masahiro Tanaka become a star in his native Japan and then jump to the United States and a $155 million contract with the Yankees in 2014.

At its best, the pitch darts sharply inward and down against right-handed batters. Its drastic late movement has left batters whiffing a third of the time they have swung at it — managing a measly .195 batting average against Tanaka’s splitter from 2014 through last season.

But like many puzzled pitchers around the majors these days, Tanaka has not been able to get his trademark pitch to behave quite the way it used to. He has clearly struggled this season — he was on pace for a career-high walk rate and earned run average (4.78) entering his start against the Baltimore Orioles on Monday.

Tanaka did well early against the Orioles and took a 6-1 lead into the sixth inning, when he allowed four more runs and departed with one out. The Yankees ended up with a 9-6 win even though Tanaka allowed 10 hits, walked two batters and pushed his E.R.A. to 4.93.

Analyzing his difficulties on the mound, Tanaka has identified a possible culprit, as have many other pitchers: the baseball itself.

To compensate for that unfamiliar feeling, Tanaka, 30, has begun tinkering with his grip, hoping to restore his mastery of the splitter.

It’s no secret in this era of record home-run rates that many players believe the ball has changed. The Minnesota Twins are on pace to smash the season home run record of 267, which was set by the Yankees last year. And this year’s major league hitters could exceed the record 6,105 long balls hit last season by more than 600 homers.

As dissent bubbled, Major League Baseball commissioned a study that was released last year and found that the ball had less drag, which allowed it to travel farther, but the researchers could not pinpoint the cause of the change. A report by The Athletic in June found that the seams of some 2019 balls were lower than those on the balls from 16 previous seasons, a change that would improve the aerodynamics.

All of this led to more expressions of concern, both from established pitchers who are having stellar seasons — such as Washington’s Max Scherzer and Houston’s Justin Verlander, who claimed the balls were intentionally juiced for more home runs — and from those who are laboring, such as Tanaka and his Yankees teammate J.A. Happ. 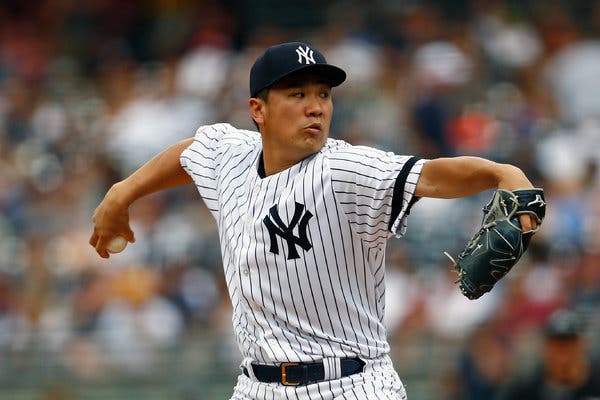 M.L.B. Commissioner Rob Manfred has fiercely pushed back against the notion that the balls used by the league — which are made with natural materials and hand-sewn in Costa Rica — had been deliberately changed.

“Baseball has done nothing, given no direction, for an alteration in the baseball,” he said at the All-Star Game last month.

That hasn’t appeased many pitchers.

For so long, Tanaka has placed his index and middle fingers along two seams of the baseball to throw his splitter, while other pitchers spread their fingers farther out. This season, Tanaka said, he has noticed a difference in the seams, and thus the behavior of the splitter.

“It’s not giving you the vertical drop,” he said.

“It looks more like a two-seamer,” Tanaka said, referring to an entirely different pitch.

The result: Before Monday’s game, opponents were hitting .292 against Tanaka’s splitter, a career high. They hit .191 against his favorite pitch in 2017 and .220 in 2018. Of the 21 home runs Tanaka had allowed this season before Monday, eight came off splitters, more than off any of his other pitches.

He managed to earn an All-Star spot, but his performances since the break have slipped, and his confidence in the splitter has clearly wavered, too. In his July 25 start against the Boston Red Sox,Tanaka surrendered a career-high 12 runs in three and one-third innings. He threw only four splitters, matching a career low, and the Red Sox whiffed at none of them.

Tanaka, a right-hander, has relied more on his four-seam fastball and his slider, which has been his best pitch this season and does not require him to rely on the seams.

“We need to adjust to the ball,” Tanaka said. “That’s what we’re given to play, and you’ve got to find your way to get accustomed to the ball right now and be effective enough to get outs.”

But change is hard. For two months, the Yankees pitching coach, Larry Rothschild, has talked with Tanaka about altering the grip on his splitter.

“We’ve just got to get comfortable with it,” Rothschild said.

Tanaka said he had tried tweaks, but they have been minor. In his previous start, against the Arizona Diamondbacks on Wednesday, he used a drastically new grip for the first time, setting his index and middle fingers across the seams instead of along them.

He threw 27 splitters and matched a season high by inducing six whiffs, according to BrooksBaseball. He allowed just two runs in four innings, baby steps for him and for a sputtering Yankees rotation that needed to improve from within since no additions were made at the July 31 trade deadline.

“I had to tinker a little bit here and there during the ballgame as well,” Tanaka said of the new splitter. “But I feel like it’s heading in the right direction.”

Tanaka and his new grip just tied his season-high for whiffs vis splitter.

Zack Britton, the Yankees relief pitcher who uses a seam to throw a mid-90s sinking fastball, said he had heard from other pitchers who have struggled to adjust to the balls and tweaked their grips as a result.

“Over the years, I’ve felt like I’d had to do something a little different to make the ball move as much as maybe it did like four years ago,” Britton said. “There’s been some pitches I throw and I rip one off, and I’ll go look at the data and then look at that pitch three years ago and be like, the numbers are close, but there’s a different feeling with it, to an extent, with the baseballs.”

The normally measured Tanaka offered a pointed response when asked about his feelings on the current ball.

“If you changed the ball, then just say you changed it,” he said. “That would make everybody feel better, in a sense.”

Then his focus turned inward. “The frustration for me is that I’m not being able to adjust well enough to the ball,” he said. “So it’s toward me right now, and it started at the beginning of the season. You want the ball to do a certain thing, but you’re not able to really make good enough adjustments to do that.”

No, Mr. Trump. Guns are the reason for mass shootings.